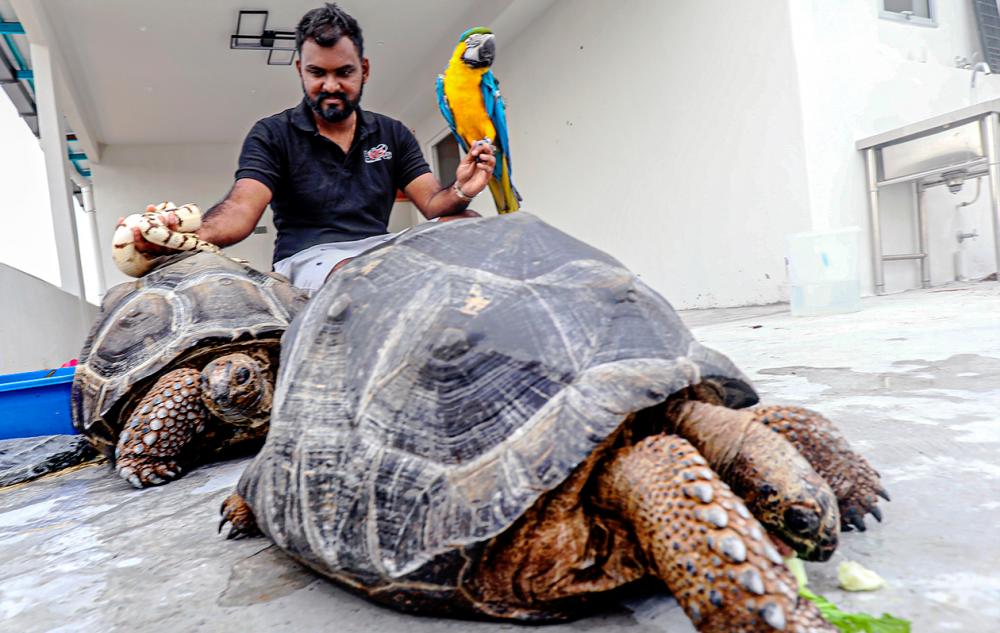 Fancy waking up to a ball python curled up next to you or a tarantula crawling on your table as you enjoy breakfast? Exotics by ARP, a unique pet store that deals in fascinating creatures can make your dream come true – safely, legally and ethically. Being Malaysia’s largest breeder of ball pythons, of which there are at least 500 species in the store at any one time, Exotics by ARP with its clean environment feels like a mini zoo for reptiles. There are also various other animals including scorpions, meerkats, chinchillas, tarantulas, bearded dragons, monitor lizards, tortoises, terrapins, geckos, skinks, macaws and parrots for sale. It was a lifelong ambition of store owner Arawin Raj Pillai, 30, to set up Exotics and in September, the business commenced at a four-storey shoplot he acquired at SS9a in Sungai Way New Village. He told theSun the animals were mainly bred by Exotics, while some were imported from the United States and Africa. (Pic) Arawin Raj Pillai feels very much at ease handling exotic wildlife at his shop in Petaling Jaya. Most of his animals are locally bred while some are imported. AMIRUL SYAFIQ THESUN Legal fraternity saddened by death of Gopal Sri Ram, hails him as a great legal mind

Legal fraternity saddened by death of Gopal Sri Ram, hails him as a great legal mind Umno elections will still be held including at suspended divisions: Ahmad Maslan

4.Legal fraternity saddened by death of Gopal Sri Ram, hails him as a great legal mind