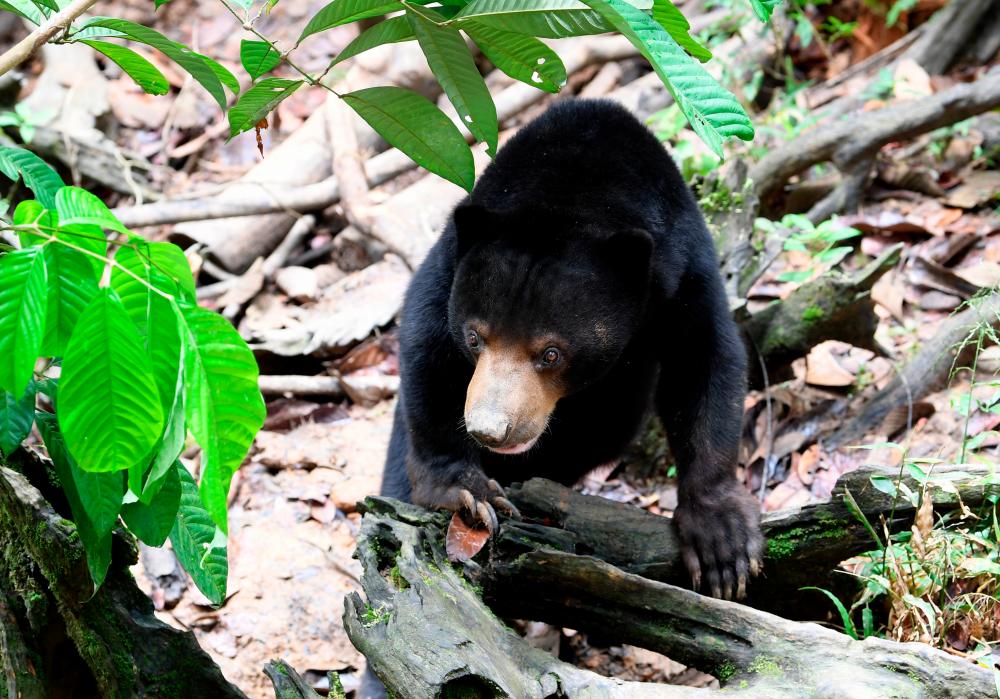 SANDAKAN: Five football fields. That’s the size of the fenced-up forested land where 43 rescued endangered sun bears are cared for at the Bornean Sun Bear Conservation Centre (BSBCC) near here.

Fifteen staff, reduced by half the number due to the Movement Control Order (MCO) in force from March 18 to April 28, manage the 2.6ha of forest located within the Sepilok-Kabili Forest Reserve where the animals have the chance to roam and have a feel of the wild during the daytime.

“The reason why we have to fence it up is because, obviously, these sun bears are wild in nature and can potentially be a danger to people (when threatened).

“So, these rescued bears are managed in the enclosed area of the forest under very high intensive care so that they don’t endanger the general public,” BSBCC founder and CEO Wong Siew Te told Bernama.

According to Wong, sun bears, also known as honey bears because of their love for honey, are vulnerable to extinction due to a number of threats, namely deforestation and poaching.

“The sun bears’ biggest threat in the past was deforestation but, with the existing forests now being protected, especially in Malaysia, there is some form of protection for wildlife, including the sun bears.

“However, poaching sun bears for their body organs such as the gall bladder for medicine, meat for consumption, claws and canine teeth for souvenirs, as well as killing adult female bears for their cubs as pets is, by far, the most severe kind of threat across Southeast Asia,” he said.

Wong said that for more than 11 years, the BSBCC has been diligent in conserving and ensuring the sun bears’ survival, including rehabilitating bears rescued from illegal activities and providing education and creating public awareness.

Sun bears, considered omnivores, feed on a wide variety of food items like vegetables, fruits and other plant-based foods, which make them excellent seed disperses, an important role towards the survival of the forest ecosystem, he said.

They also feed on invertebrates such as insects and termites, which is a means of controlling pests, as well as wild honey or the locally known kelulut produced by stingless bees.

They use their sharp claws to make cavities in trees when they hunt for insects and reach for beehives. These cavities will then provide a home for them or other wildlife.

Their act of digging holes in the ground enriches the soil nutrients, while their tendency to sift through fallen leaves for food and then leave food scraps delights other small animals like many species of birds.

But at BSBCC, Wong said, they might as well be content with the abundance of food laid out for them by the bear keepers. The food consists of bananas, papayas, watermelons, pumpkins, sweet potatoes, corn, carrots, rice porridge, eggs and dog food.

To satisfy their sweet tooth, they are given sugar cane. They also enjoy the kelulut honey from the beehives set up naturally by the stingless bees that have also made the centre their home, thus giving an opportunity for the sun bears to practise their food-hunting skills.

The sun bear is the smallest of the eight leading bear species in the world, according to the International Union for Conservation of Nature (IUCN). The other seven are the sloth, polar bear, giant panda, spectacled or Andean bear, American black bear, Asiatic black bear and brown bear.

Sun bears, known scientifically as helarctos malayanus or helarctos malayanus euryspilus for the Bornean sun bears, are categorised as vulnerable to extinction, but can still be found in eastern India, Bangladesh, Myanmar, Thailand, Cambodia, Laos, Vietnam, Malaysia and Indonesia.

Their name comes from the white or yellowish patch on their chests, which is said to resemble the rising or setting sun.

They are known locally as beruang madu, the Malay term literally meaning honey bear, which is also a common name for a non-bear species known as a kinkajou, a relative of the raccoon found in central and south America. — Bernama