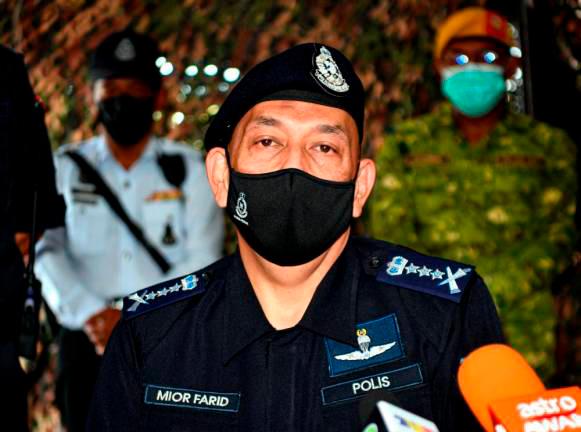 IPOH: Twenty-seven individuals were arrested for various offences in the Special Crime Prevention Op for about four hours around the city, last night.

Perak police chief Datuk Mior Faridalathrash Wahid (pix) said twenty people were arrested for narcotics and criminal offences (5) and other offences (2 ) from inspections on 1,712 individuals during the operation.

“A total of 2,480 vehicles were inspected and 66 summonses were issued for traffic offences,“ he said in a statement here today.

He said the operation involved a total of 770 police officers comprising 135 senior officers and 635 junior police officers with the assistance of 17 officers from the Royal Malaysia Police Volunteer Reserve (SSPDRM) and the Malaysia Volunteers Corps Department (RELA).

Mior Faridalathrash said the operation was carried out following complaints from members of the public who said they were worried about the increase in criminal cases in their residential and business premises.

“The police also use an ‘omnipresence’ approach, especially in areas where the public is concentrated to create a sense of security among the local community.

“People can also cooperate by sharing information with the police if there is a crime,“ he said. — Bernama