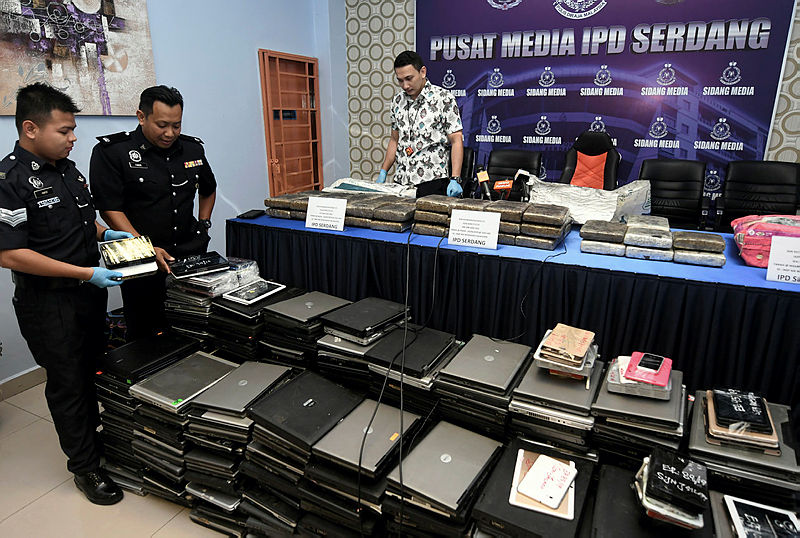 Police display the devices seized during the raids. — Bernama

SERDANG: The police have arrested 310 individuals following massive raids on illegal gambling dens in Serdang since the beginning of the year.

“Most of the perpetrators were picked up from the premises which were operating online gambling from Jan to April 16.

“Police seized RM20,842 cash along with 880 items, including laptops, computers and handphone worth at least RM40,000. These syndicates have been active for quite a while,” he told a press conference here today.

Ismadi said the police will not tolerate those who flout the law.

“These syndicates uses various tactics to conduct their operation. The common tactic is by using tablets (IPad, etc) to enable customers to play the games outside their premises.

“Our stance is clear and we will take serious action against anyone found breaking the law and will continue to do so,” he said.

He urged members of the public with information to contact the police as soon as possible.

Meanwhile, in a separate raid, police seized 49kg of ganja worth RM150,000 following the arrest of a woman in Seri Kembangan here on Tuesday.

The suspect, 27, was picked up after policemen stopped her car at Lestari Perdana 3, in Seri Kembangan at about 6pm.

Ismadi said upon inspection of the vehicle, police discovered three sacks containing 50 slabs of ganja with a street value of RM150,000.

The suspect was also tested positive for methamphetamine.

The investigations revealed that the drugs were originated from Kelantan and was suppose to be marketed in Klang Valley.