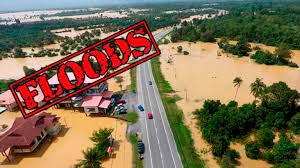 JOHOR BAHRU: Three districts in Johor have been hit by floods due to prolonged rains since yesterday, with 348 people from 87 families evacuated to temporary relief centers as of noon.

Meanwhile, Johor Public Works, Transport and Infrastructure Committee chairman Mohd Solihan Badri said there was a slippery stretch of road along the Kluang-Mersing route nearby Kampung Contoh, Kahang, near Kluang, however, vehicles could still pass.

However, he said light vehicles could not pass another three locations along the same route, namely Ladang Pakloh, Taman Industri Batu 4 and Kampung Gajah, Kluang, as the roads were submerged in 0.2 to 0.6 metres of water.

He said the Public Works Department was currently monitoring the flooded roads and had installed flood warning signs. -Bernama