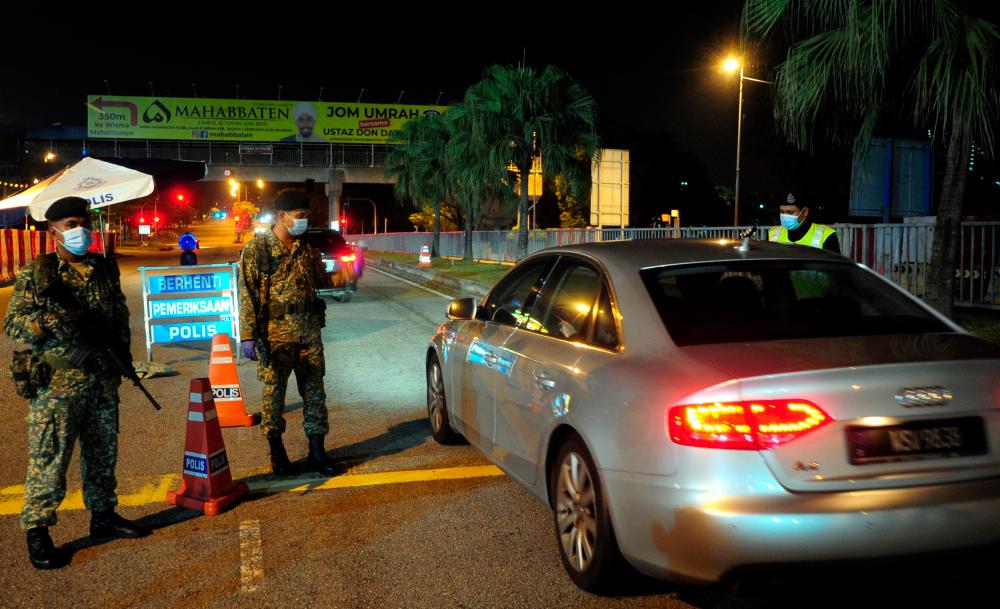 Officers from the Malaysian Armed Forces, during a road block as part of the enforcement of the Movement Control Order (MCO), in Sekysen 7, Shah Alam, on April 1, 2020. — Bernama

He said 1,449 of these cases have been charged in court so far, and that some of them have also been sentenced.

Ismail however noted that there has been a drop in the number of arrests being made nationwide, which he pointed towards more Malaysians complying with the MCO and adhering to authorities’s orders.

“For instance, yesterday 562 arrests were made compared to 583 the previous day either in road blocks or during police patrol. That’s a 3.6% decrease,” he said in a press conference, here, today.

Based on previous reports, the figures are a further decline from those reported earlier this week, where 828 and 742 individuals were nabbed on March 30 and 31 respectively.

“If this trend proves public compliance, then it is good news. This is something that the government has been waiting to see, that the rakyat realise of their respective responsibilities,” he said.

Those who disregard the MCO, which ends on April 14, face a fine of up to RM1,000 or imprisonment not exceeding six months or both.

On a separate matter, Ismail said the Housing and Local Government Ministry (KPKT) has identified 348 new areas nationwide that would be disinfected, 48 of which was conducted today.

He said to date, a total of 252 areas have undergone disinfection since March 27.

Ismail added that the Health Ministry (MOH) has also provided a guideline for KPKT to carry out its operations after several quarters questioned its standard operating procedure.

On whether the government would extend the current MCO period further, Ismail this has yet to be decided, and that any decision would come from MOH.

“But thank god, based on MOH’s report, the trend in number of new Covid-19 cases is not increasing, but quite flat.

“We pray that if the MCO continues to be adhered by Malaysians, then I believe the number of new cases would drop. Let us all pray,” he said.