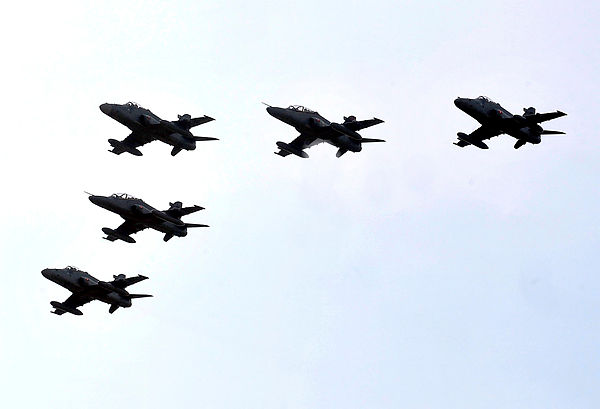 BUTTERWORTH: The aircraft Hawk aircraft, which has been serving the Malaysian Royal Air Force (RMAF) for the past 25 years, is still relevant in carrying out its main role in maintaining the safety and sovereignty of the country’s air space.

In fact, RMAF chief General Tan Sri Affendi Buang said that the aircraft could last for another 10 years with some improvements, especially in systems and technology.

“Although, this aircraft is already 25 years old, the effort of all levels in the RMAF has turned the aircraft into one of the platforms for defending the sovereignty of our nation’s air space.

“Indeed, there is a need to increase the number of the aircraft of which there are 19 throughout Malaysia, but it depends on the national financial resources,“ he told reporters after launching a Hawk Aircraft Silver Jubilee Anniversary celebration at the Butterworth Air Base, here today.

Earlier, Affendi boarded a Hawk 108 aircraft from Subang, Selangor, flown by No. 6 Squadron commanding officer Lieutenant Colonel Mohammad Syagol Abdul Hamid to the Butterworth Air Base, while accompanied by another Hawk 108 aircraft.

Affendi said that during its 25 years of service, the Hawk aircraft had been operated by three squadrons, namely No. 6 Squadron, No. 9 Squadron and No. 15 Squadron.

“Among the largest operations involving this aircraft was Ops Daulat on March 2013 in which five Hawk aircraft were assigned to launch air strikes on the illegal hideouts of terrorists in Lahad Datu, Sabah.

“The No. 6 Squadron has also been transferred to the Labuan Air Base from the Kuantan Air Base after Ops Daulat. This transfer is to strengthen national defence in Sabah and Sarawak,“ he said.

Four Hawk aircraft were scheduled to be involved in the air performance in Langkawi in conjunction with the 2019 Langkawi International Maritime and Aerospace Exhibition (LIMA’19) which is expected to take place from March 26 to 30.

The history of the RMAF Hawk aircraft’s service began on April 15, 1994 after the receipt of the first two planes through a Memorandum of Understanding (MoU) between Malaysia and the United Kingdom, which was sealed on Dec 10, 1990.

At that time, Malaysia agreed to obtain the services of 10 Hawk 108 and 18 Hawk 208. The aircraft were received in stages with two planes delivered each month. — Bernama