Aidilfitri: Ban on Muslims from visiting cemeteries in Selangor 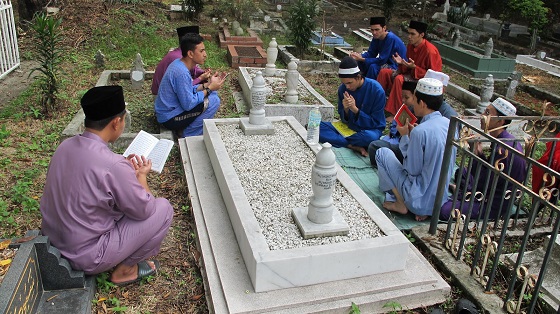 SHAH ALAM: Muslims in Selangor are not allowed to visit royal tombs and cemeteries during the Aidilfitri celebrations, especially before or after the Hari Raya Aidilfitri prayers.

Selangor Islamic Religious Department (JAIS) director Mohd Shahzihan Ahmad said the decision was taken in line with the implementation of the Conditional Movement Control Order (CMCO) to prevent the outbreak of Covid-19.

“Those who wish to visit the graves of their loved ones during this period can replace the visit by reciting the tahlil (prayer for the dead), zikir (utter allah’s name repeatedly) and doa (entreaties) at home to be rewarded to their late families and relatives,“ he said in a statement yesterday.

Mohd Shahzihan said those who managed royal tombs and cemeteries in the state, were also asked to assist JAIS to ensure that the ruling was complied with by all sectors of society.

He said the time frame of the ruling was subject to another statement to be released by the department. — Bernama