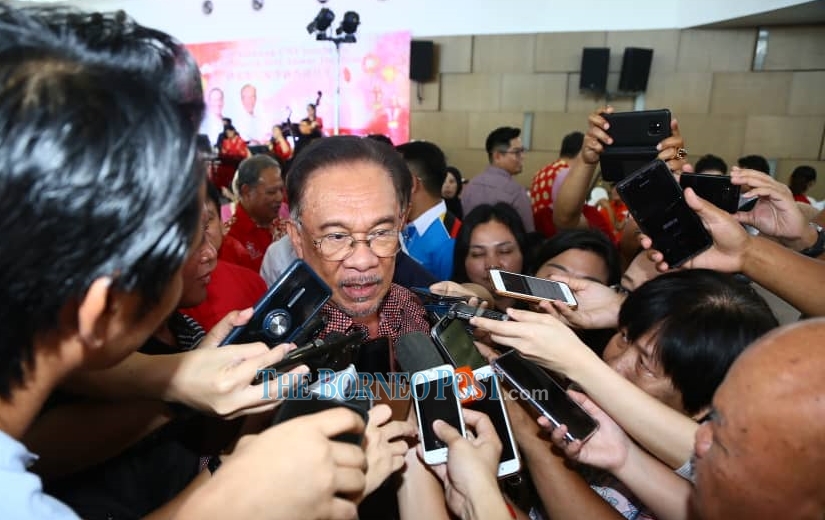 KUCHING: National Parti Keadilan Rakyat (PKR) president Datuk Seri Anwar Ibrahim said yesterday that he had to be the next prime minister first before he could decide on whether or not to initiate a Cabinet reshuffle.

“The standard answer will be ‘Let me be prime minister first. Then the question will be answered’,” he said when met by reporters during the ‘Pakatan Harapan (PH) Sarawak Chinese New Year (CNY) Luncheon with Datuk Seri Anwar Ibrahim’ held at The Banquet here today.

He added: “We are quite established, thanks to the leadership of (PH Sarawak chairman) YB Chong (Chieng Jen) and the team because they seem to be more focused on the state election.”

Anwar is expected to be in Tawau, Sabah later today for a similar gathering.

Meanwhile, Chong said Anwar succeeding Tun Dr Mahathir Mohamad to be the next prime minister was “our promise, what we agreed and that’s our direction”.

“We’ll keep to our promise and our direction. We are honoured to have the eighth Prime Minister of Malaysia Datuk Seri Anwar Ibrahim. Thank you (Anwar) very much for dropping by,” he said.

The Democratic Action Party (DAP) Sarawak chairman said even though Anwar is yet the eighth prime minister, he believed the PKR leader would carry on PH’s fight against corruption.

“When he (Anwar) is prime minister, we will step up further to fight corruption. Fighting corruption is the key agenda for us to move forward,” added Chong.

Anwar is in the city solely for the festive gathering and expected to be in Tawau, Sabah later today for a similar event. — TheBorneoPost