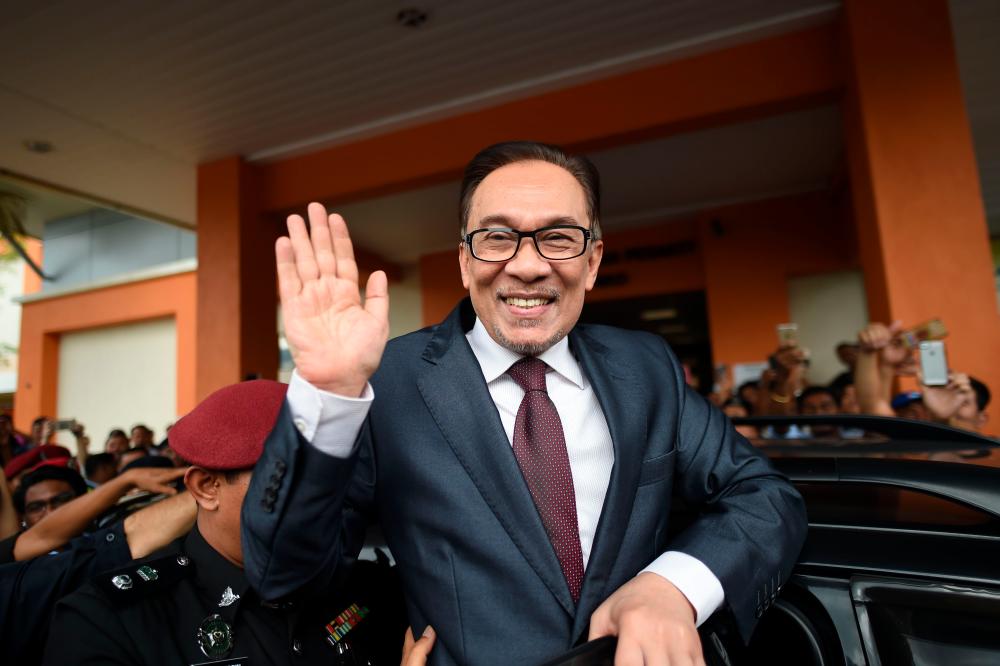 (FILES) Anwar Ibrahim greets supporters after his released from the Cheras Hospital Rehabilitation in Kuala Lumpur on May 16, 2018. AFPPIX

KUALA LUMPUR: Datuk Seri Anwar Ibrahim took his oath of office as the 10th prime minister of Malaysia today, after having been what many describe as the longest prime minister-in-waiting - almost 25 years.

The 75-year-old chairman of the Pakatan Harapan (PH) coalition and president of PKR is no stranger to national administration as he was the deputy prime minister prior to his sacking in 1998 and imprisonment later on charges he said were politically motivated attempts to end his career.

Anwar had captured the Tambun parliamentary seat in the just-concluded 15th general election (GE15), leading PH to win 82 seats in an election that ended in a hung parliament that was resolved by Yang di-Pertuan Agong Al-Sultan Abdullah Ri’ayatuddin Al-Mustafa Billah Shah following deliberation with the Malay Rulers.

The new prime minister, known for his oratory skills and his ability to keep his audience spellbound, was born on Aug 10, 1947, in Cherok Tok Kun, Bukit Mertajam, in Penang.

He received his primary education at Sekolah Kebangsaan Cherok Tok Kun and Sekolah Stowell before entering the prestigious Malay College Kuala Kangsar and pursuing his bachelor’s degree in Malay Studies at Universiti Malaya.

Having been active as an Islamist student leader during his university days, Anwar founded the Muslim Youth Movement of Malaysia or ABIM and served as its president until 1982.

At the same time, he was also a member of the Asian Youth Council, World Youth Council and the Asia Pacific Regional Committee of the World Assembly of Youth.

In 1982, Anwar accepted an invitation from the then 4th Prime Minister (PM) Datuk Seri (now Tun) Dr Mahathir Mohamad to join UMNO and his government.

He was first elected as a Member of Parliament for Permatang Pauh in the same year and advanced swiftly with his appointment to the Malaysian administration as a deputy minister in the Prime Minister’s Department. Subsequently, he served as the Minister of Culture, Youth and Sports (1983); Minister of Agriculture (1984) and Minister of Education (1986).

In 1993, he was appointed as the deputy prime minister.

During his service in the government, Anwar also made Malaysia proud when he was named Asia’s Best Finance Minister in 1996.

However, on Sept 2, 1998, Anwar was sacked from the government administration and sentenced to six years’ imprisonment in 1999.

Being in jail did not dampen the fighting spirit of Anwar as he began promoting and championing the reformation agenda through his new party, Parti Keadilan Rakyat (PKR).

Anwar was released from prison in 2004 but he could not return to politics as the law prohibited him from participating in politics for five years from the date of his release. - Bernama