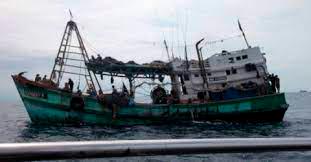 LUMUT: An attempt by 21 Indonesians to enter the country failed after their boat was left to drift due to engine failure, about 15.5 nautical miles northwest of Kepulauan Sembilan near here last Saturday.

Perak Maritime director, Captain Shahrizan Raman, said the Perkasa 1223 boat was deployed to the scene after receiving a public tip-off at about 12.20 pm.

Shahrizan said investigations found the Indonesian wooden boat without a registration number had encroached into national waters before drifting for two days after their boat engine stalled.

“Inspection found 21 Indonesians on board were without any valid documents. They were surviving on instant noodles with seawater,” he said at a press conference here today.

Shahrizan said based on the information, six Indonesian skippers were handling the boat, but all of them escaped with another Indonesian boat, leaving the migrants stranded in the wooden boat in the middle of the sea.

“We believe it is a syndicate and its modus operandi was to wait for our local (Malaysian) fishing boats operated by Indonesians at the border of the country’s waters and transfer all the foreigners to Malaysia.

“The transportation fee for each individual from Malaysia to Indonesia is believed to be RM1,500 and from Indonesia to Malaysia at RM1,200,” he added.

“Investigations found that all the Indonesians have been to Malaysia before, and the boat left Tanjung Balai, Indonesia at 3 am on Oct 14 towards Sekinchan, Selangor, he added.-Bernama

2.Covid-19 test for travellers arriving in S’pore via land VTL from Nov 29