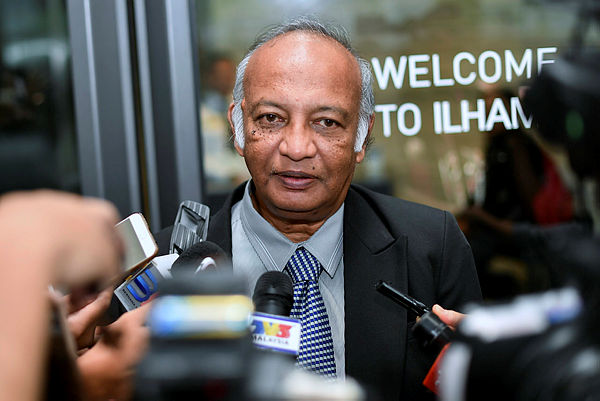 KUALA LUMPUR: A maintenance audit team should be set up at public transport stations to ensure that the facilities at these places are well maintained, said Federation of Malaysian Consumers Associations (Fomca) chief executive officer Datuk Dr Paul Selvaraj (pix).

He said the maintenance audit team should be proactive to quickly identify the causes of problems and take remedial measures.

When making a surprise check at the station on Monday, Loke said he was disappointed to find out that three of the four ticketing machines there were not working, adding that it was an embarrassing situation which marred the image of public transport in the country.

Paul said although various facilities provided by the government had suffered from poor maintenance, the problem affecting KTMB was particularly common.

“The KTMB public transport registered the most number of complaints on breakdown of ticketing facilities and other problems. This matter should be viewed seriously,” he said today.

He urged KTMB to set up a team to monitor its facilities and ensure that they are properly maintained.

“Anything that is broken should be repaired and servicing should be done fast so that consumers would not be inconvenienced. This will increase public confidence that public transport is the best mode of daily travel,” he said.

He said the ticketing issue was not new to KTMB as in November last year its ticket server had crashed due to overwhelming demand, leaving thousands of consumers disappointed.

Paul said KTMB should focus on areas with a high traffic volume, including major towns and cities and popular tourist destinations.

“Security at public transport areas should be strengthened, including by stationing guards and installing closed-circuit television, to reduce the risk of vandalism.

“Vandalism is a long-standing problem and it can only be overcome if the government takes firm action against the culprits,” he added.

He said the people should also be educated on their role to help check vandalism as any damage to public facilities would only inconvenience the public.

Loke had urged the top management of public transport providers including Prasarana, MRT Corp and KTMB to be more proactive by going to the ground to resolve service issues which affect consumers.

“I know of many issues, particularly complaints on KTMB’s ticketing and service, so we need to improve. There is no point implementing big projects and spending billions of ringgit to upgrade tracks and stations if our service is still lagging far behind,” he said. — Bernama

3.Buttler hopes England maintain momentum with Bangladesh up next

4.Proteas down Windies after De Kock refuses to take knee

5.Dybala and Chiesa both to start as Juve hunt for more goals