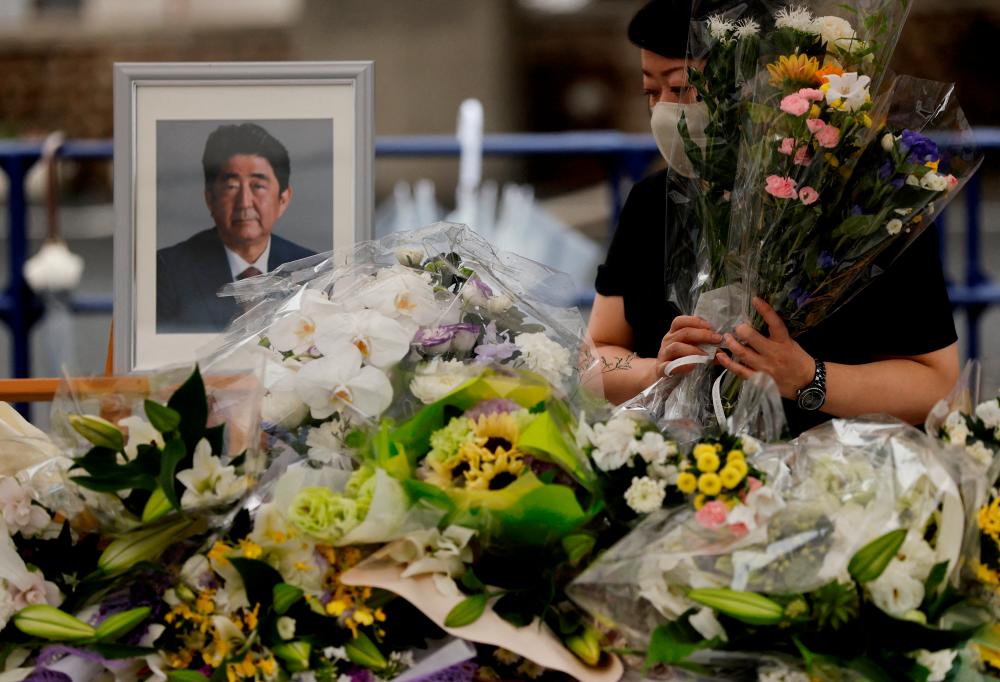 FILE PHOTO: A mourner offers flowers next to a picture of late former Japanese Prime Minister Shinzo Abe, who was shot while campaigning for a parliamentary election, on the day to mark a week after his assassination at the Liberal Democratic Party headquarters, in Tokyo, Japan July 15, 2022. REUTERSPIX

The state funeral will be held on Sept 27 at Nippon Budokan, Tokyo.

Abe, the longest-serving prime minister in Japan was assassinated while delivering an election speech in Nara on July 8.

During his tenure as the Prime Minister of Japan, Abe visited Malaysia three times and played an instrumental role in enhancing bilateral relations including strengthening further the Look East Policy (LEP).

His last visit to Malaysia as the Special Envoy of the Prime Minister of Japan was to commemorate the 40th anniversary of the LEP in March 2022.

During the visit, he had an audience with the Yang di-Pertuan Agong Al-Sultan Abdullah Ri’ayatuddin Al-Mustafa Billah Shah as well as a meeting with Prime Minister Datuk Seri Ismail Sabri Yaakob.

Prime Minister and Foreign Minister had signed the book of condolences at the Embassy of Japan in Kuala Lumpur on July 13, the statement read. - Bernama 1.Hannah Yeoh urges all ministries to act in unison for sports development

3.Govt will remain consistent in fight against graft: PM Anwar

4.Policies beneficial to the people will be continued: Mohd Na’im