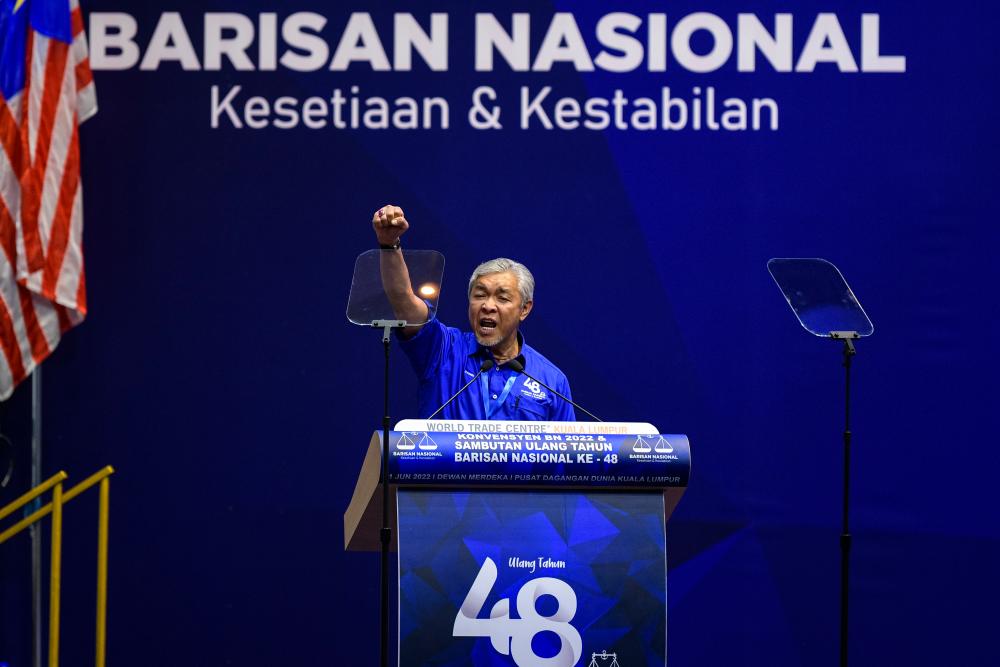 KOTA KINABALU: Barisan Nasional’s (BN) resurgence, especially in the previous state elections, including in Sabah, is proof that the party’s leadership is committed and concerned about winning over Malaysian voters.

BN chairman Datuk Seri Ahmad Zahid Hamidi (pix) said the resurgence laid to rest claims by outside parties that the 14th General Election (GE14) in 2018 marked the demise of the party.

“They had wrongly analysed and predicted BN’s demise in 2018. Currently, there are four parties applying to join BN as core component members.

“This means if Umno and BN and other component parties have reached their end of their political lifetime, it would be impossible for those parties to want to join BN.

“Based on our resurgence, BN’s rise in Sabah in the state election; on our performance in the Melaka and Johor state elections, Insya-Allah, I am confident BN will rise once again in GE15,” he said during his speech at the BN supreme council members dinner with the Sabah BN leadership at the Umno Building in Karamunsing here last night.

Ahmad Zahid, who is also Umno president, said that it was the responsibility of all BN leaders and members to create a meeting of minds and to focus together to win the upcoming general election.

“Malaysians miss BN, our citizens love BN, and they want to see BN reclaim Putrajaya. If they (Malaysians) have put their hopes on us, please don’t let them down. We have confidence in them, so they have placed their hopes in us.

“We are confident that under the PM’s (Ismail Sabri) leadership as head of the federal government, BN leadership will support his aim to resolve current public issues.

“BN will continue to support all government policies....we want to win the voters’ mandate, hopefully BN will triumph, not only in Putrajaya but also other states, including Sabah,” he said. — Bernama