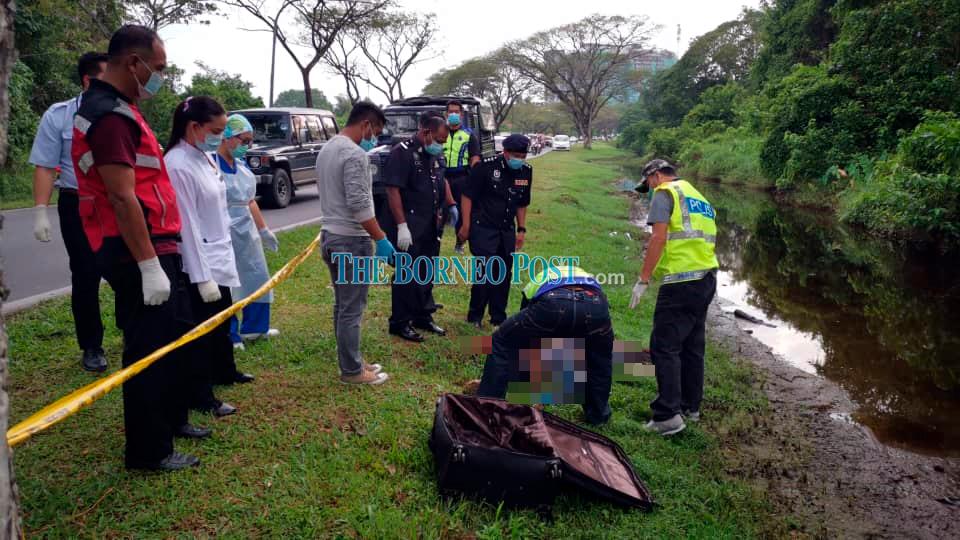 Police personnel examining the body at the scene.

SIBU: The body of a woman, believed to be in her late 30s, was found with her legs stuffed inside a black suitcase at the roadside of Jalan Aman here at about 6.45am today.

The body, clad in a grey round neck T-shirt and polka dot long pants was discovered by passersby.

Sibu police chief ACP Stanley Jonathan Ringgit when met at the scene, said the body was found partially stuffed inside the suitcase.

He disclosed that police suspected that the deceased may have died somewhere else and the body was dumped at the roadside of Jalan Aman here.

“There are no injuries on the body. There is also no sign of struggle or weapon found at the scene.

“The case is classified as murder pending a postmortem because we do not know how she died.”

Stanley confirmed that two handwritten notes were found near the body.

The notes were written in Mandarin, with one of them having MyKad number with the state code of ’08’, which is believed to signify Perak.

Stanley said they will trace the deceased’s family members from the notes and information gathered at the scene.