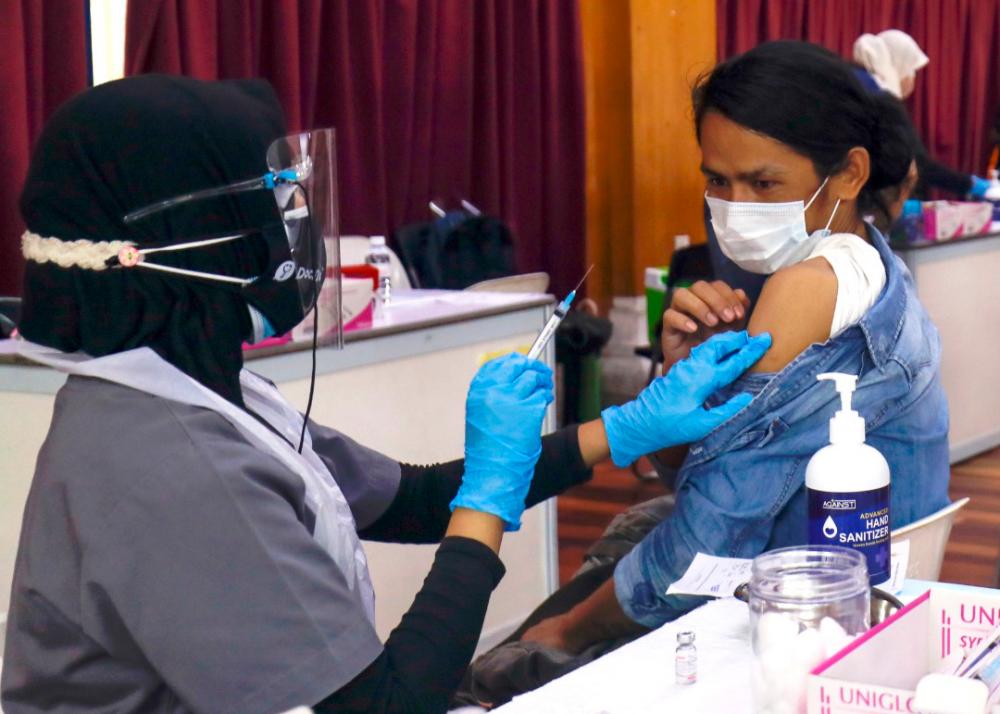 Pix for representational purpose only. -Asyraf Rasid / The Sun

THE National Recovery Plan (NRP) phase transition indicators have been reported as daily hospital admissions for the total number of patient cases in category 3 and above, nationwide threshold value of symptomatic daily cases, and utilisation capacity of intensive care units (ICU).

The reason for this is likely due to the fact that current data (against current variants) indicate significant impact of vaccination in reducing severe cases, hospitalisations and death. However, effectiveness against infections – particularly the Delta variant – is lower. In other words, the landscape has shifted and the number of cases have become relatively less important. But breakthrough infections and future variants could pose a real threat to recovery, and we could be underestimating vaccination targets.

It has to be noted that studies on breakthrough cases are recent, not easily compared and some findings appear contrasting with one another.

Some studies point to low breakthrough incidence, and others appear to point to higher rates. Either way, it poses the question of vaccine effectiveness, which may impact the indicators used towards gradual re-opening of the economy and increased freedom of movement.

A US state-level report from the Kaiser Family Foundation (KFF) points to the rarity of breakthrough cases when it found that the incidence in fully vaccinated individuals to be “well below 1% in all reporting states, ranging from 0.01% in Connecticut to 0.29% in Alaska”.

This is consistent with the Centres for Disease Control and Prevention (CDC) slides published by The Washington Post that there are 35,000 weekly symptomatic infections from the 162 million vaccinated Americans, which is an incidence rate of about 0.02%.

Is this showing that Malaysia’s breakthrough case rate is hundreds of times bigger than the cases reported by the CDC and the KFF? If so, what could be driving it? Could this be related to different vaccine types?

Even if the figure appears large, it appears to be well below the figures reported in a recent release by the CDC, which found 74% of the 469 people infected in Massachusetts (due to an outbreak, whereby 90% is Delta infections) were among those fully vaccinated.

Furthermore, among these, 79% reported symptoms. The good news is that there were only four hospital admissions and zero deaths. This supports the effectiveness of vaccines in preventing severe disease, but the high percentage of symptomatic cases among the fully vaccinated (even if not hospitalised) could affect the symptomatic daily cases indicator (“nationwide threshold values”) of the NRP.

EMIR Research warned in its article “Are we easing movement restrictions a little too soon?” dated July 21 that a significant portion of the population could have a relatively significantly lower antibody level. Although memory immunity cells may retain information, it could be for the “wrong” type of antibodies.

We also mentioned potentially uneven levels of protection due to inoculation with different types of vaccines that could be unprepared to take on the rising spread of virus, particularly from what is now the dominant Delta variant.

It was reported that the decision to use these indicators was based on the experience in Sarawak and Labuan, where the risk of infection, rate of symptomatic cases and need for ICU treatment saw a significant reduction after the vaccination rate reached 50% in July.

We have to keep in mind that the protective impact of a certain percentage of vaccinated population is directly tied to the effectiveness of the vaccines as well as infectivity rate.

Breakthrough cases and high infectivity rate of variant Delta could mean that the “50%” assumption is underestimated, and that a much bigger vaccinated population target may be required prior to phase transitions and easing restrictions.

Growing evidence that vaccinated people may also carry and transmit means the traditional herd immunity definition is no longer valid. Therefore, the future definition appears to be herd immunity against severe disease. But breakthrough infections and future variants could threaten even this outlook.

The CDC slides also pointed to published studies indicating Delta to be clearly more infectious and likely to cause more severe disease than Alpha, when comparing vaccinated versus unvaccinated groups.

The CDC also referred to studies indicating that for those fully vaccinated, effectiveness in preventing infection and symptomatic disease is lower for Delta compared with Alpha, but similar for hospitalisations and deaths (although this may differ between different vaccine types.

Thus, the indicator of the number of patients in severe categories and ICU admissions may be affected as well, though to a lesser degree than the indicator for daily cases.

The use of such indicators re-emphasises the importance of managing disease progression, whereby large-scale early intervention is key.

We refer back to our suggestions outlined under “Reinventing Covid-19 pandemic management: Speed and scale” dated July 27. Additionally, we should expand this into other drugs, and not put all our options in one vaccine basket.

It was reported that Singaporean researchers using an artificial intelligence platform had identified antiviral drug Remdesivir, together with lopinavir and ritonavir as the “cocktail” to treat Covid-19 patients with mild to moderate disease, and that it has also shown promising results in terms of effectiveness against the Beta and Delta variants of the virus.

Malaysia’s current protocol have already considered these exact drugs, though Remdesivir is not available yet in Malaysia. We should speed up and scale up on-going clinical trials (such as Ivermectin) and other drugs, especially for early intervention, and not simply wait until we have exhausted all already-approved methods.

Increased freedom for those fully-vaccinated

Fully-vaccinated individuals in Phase 2 are also said to be allowed to cross district, dine in, and even engage in same-state tourism as long as one has a digital certificate of Covid vaccination.

On one hand, authorities have stated that antibody measurements are not recommended as there are no guidelines for public use yet. But on the other hand, the policy for the fully-vaxxed trusts fully that vaccination certificates equal an immunity passport, despite all the immunological and virological uncertainties mentioned earlier.

EMIR Research would like to reiterate its concerns that in addition to potential difference in the level of protection by different vaccines, not all those vaccinated may be immunised and there is risk of waning immunity.

We mentioned before that fully vaccinated people can be carriers too, especially in the absence/insufficient mucosal immunity. If they are exposed to non-protected individuals, they could be sparking sporadic and cluster cases in unprotected communities.

Recent findings by the Public Health England and CDC greatly support this postulation when they found that the polymerase chain reaction cycle-threshold for both unvaccinated and vaccinated people are similar, which has been inferred to mean both are carrying similar virus loads and, therefore, similar level of virus transmissibility.

Consultant Paediatrician Datuk Dr Amar Singh HSS had warned that other states with relatively lower vaccination rate than Greater Klang Valley may face a Delta outbreak and undergo a potentially worse situation. We are still firefighting in Klang Valley. Allowing fully vaccinated people to cross states with lower vaccination rates is not advisable.

Opening schools should also be done when all adults have been vaccinated (which has been targeted by October) since younger age groups are not protected, which can act as a reservoir for continued transmission and exposure to adults.

In summary, we have to be on the side of caution until a higher percentage of vaccinated population is achieved (which should be reflected by the careful movements of vaccinated people), focus on increasing vaccination rates, enhance containment of virus spread in communities with low vaccination rate by increasing Find-Test-Trace-Isolate-Support strategy (effective contact tracing, ability to do tests at home and self-quarantine could be a significant measures), and prevention of disease progression through large scale early interventions.

Ameen Kamal is the Head of Science & Technology at EMIR Research, an independent think tank focused on strategic policy recommendations based on rigorous research. Comments: letters@thesundaily.com