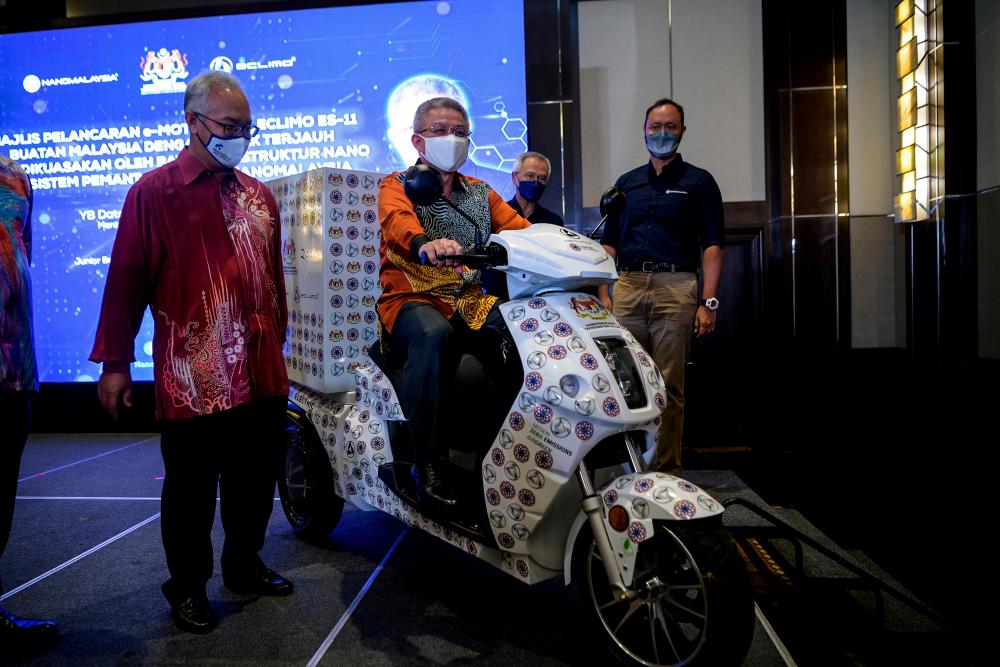 KUALA LUMPUR: The launch of locally made electric scooters powered by nano-structured batteries proves the commitment of the Ministry of Science, Technology and Innovation (MOSTI) in ensuring Malaysia’s goal of becoming a carbon-neutral country by 2050 is achieved.

Its minister Datuk Seri Dr Adham Baba said the launch of the motorcycle named ‘Eclimo ES-11’ would pave the way for the country to join the multi-billion ringgit electric vehicle (EV) industry, and help revive the economy post-Covid-19.

To that end, he said food or grocery delivery service companies could lead the way, by using the environmentally friendly vehicle.

“The Covid-19 pandemic has created opportunities for other sources of income, (such as) through delivery services using motorcycles.

“So I hope vehicles such as motorcycles with nano-structured batteries will be widely used in Malaysia in the future, and to achieve this, we must all band together,“ he said while launching the electric motorcycle developed by MOSTI in collaboration with NanoMalaysia Berhad and Eclimo Sdn Bhd, here today.

The use of EV vehicles is in line with the country’s goal to reduce the intensity of greenhouse gas (GHG) emissions to Gross Domestic Product (GDP) by 45 per cent by 2030, as outlined in the 12th Malaysia Plan (12MP).

According to Dr Adham, the Eclimo ES-11 has a 100km-range per charge cycle, a maximum speed of 100 kilometres per hour (km/h), and with the right pricing, can potentially have a huge impact on the market.

He also drew attention to the fact that the vehicle provided a three-pin plug charging system, which would solve the problem of the lack of infrastructure and charging stations often faced by EV users.

“Besides that, the special feature of using the nano-structured battery is that it can monitor the condition of the battery by sending alerts when the battery voltage decreases, and also provides a tracking and geotagging system that can be controlled using mobile applications,“ he said.

He said the nano-based lithium-ion battery cell had up to 1,000 charge cycles, with the system saving up to seven kilogrammes of carbon dioxide emissions for every 100 kilometres travelled.

Meanwhile, NanoMalaysia chief executive officer Dr Rezal Khairi Ahmad said the motorcycle had been tested on a commercial scale to meet the use cases, including for the delivery of food, groceries, medical and pharmaceutical products and e-commerce packages as well as being used as a mode of transportation.

He said 58 Eclimo ES-11 units had been built so far, with 41 of them rented out under a leasing model in the Klang Valley, Penang, and Johor.

“In fact, plans are underway to provide the ES-11 as a mode of transportation in the city to the public, through a shared service such as the likes of ‘Beam’ and ‘Tryke’, that allow users to rent the scooters for a short-term through an application,“ he said.

Rezal said the launch of the electric scooter was timely, as when unveiling Budget 2022 recently, the government had committed to supporting the EV industry by exempting the import duty, excise duty and sales tax for all EV vehicles, as well as providing income tax relief of up to RM2,500 for the cost of purchase, installation, rental, hire purchase facilities as well as the cost of subscribing to the EV charging facility. — Bernama