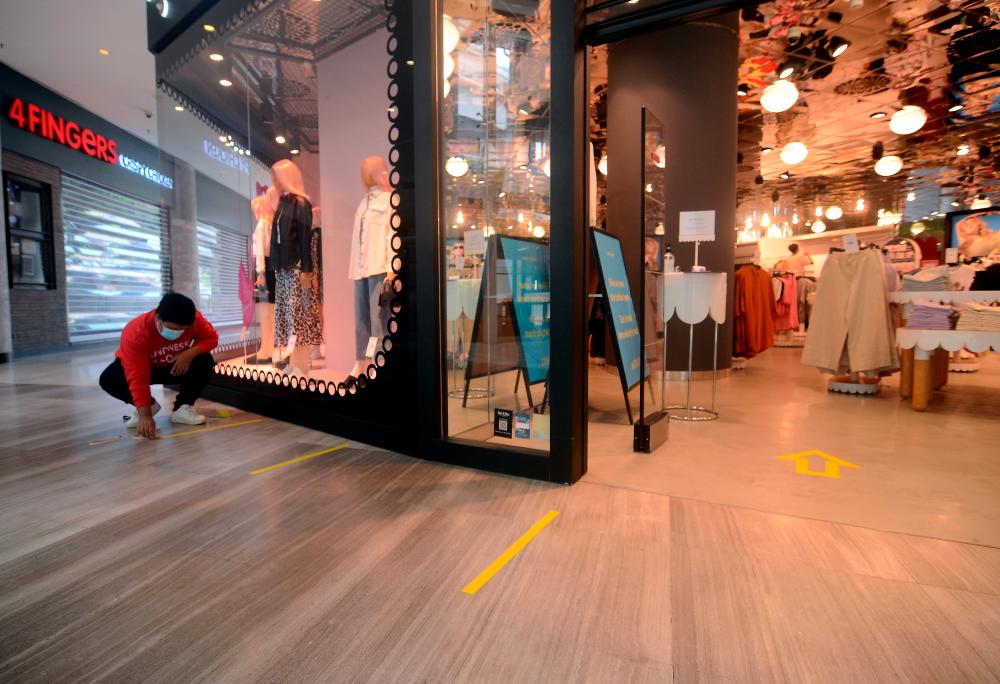 A worker at a retail outlet in Gurney Paragon in Penang, lays down the market to ensure shoppers observe social distancing, on May 10, 2020. — Bernama

GEORGE TOWN: The level of compliance among supermarket operators in the Northeast district of Penang with the standard operating procedure (SOP) of the Conditional Movement Control Order (CMCO) has reached 85% on its third day of implementation.

Northeast district police chief ACP Soffian Santong said checks and surveillance conducted at 13 supermarkets in the district every day from 8am to 10pm found that the supermarket operators understood and complied with the SOP issued by the National Security Council (MKN).

“15 policemen are assigned to carry out daily checks and surveillance. It was found that the business outlets such as clothing stores adhere to the SOP, including by closing their fitting rooms.

“Some also used the QR code system to ensure their customers fill in personal details before entering their outlet,” he told the media after inspecting a supermarket in Jalan Magazine, here today.

He also urged the supermarket management to strictly adhere to the SOP and ensure all escalator handrails are wiped with disinfectant at least once every hour to help prevent Covid-19 infection.

“Meanwhile, police patrol units have been increased from eight to 16 units to conduct 24-hour surveillance in public markets and roadside stalls in the entire Northeast district,” he said.

Chief Minister Chow Kon Yeow said the state will need some time to gauge the impact of the strategic plan on the local market and hoped that the opening of economic sectors would not dent Malaysia’s hard work so far to contain the pandemic.

Penang has not recorded any new Covid-19 case in over two weeks and has become the fourth state to be declared a Green Zone. — Bernama

1.US to step up deportation flights for migrants stranded at Texas bridge

3.Mane’s return to form a boost for Liverpool