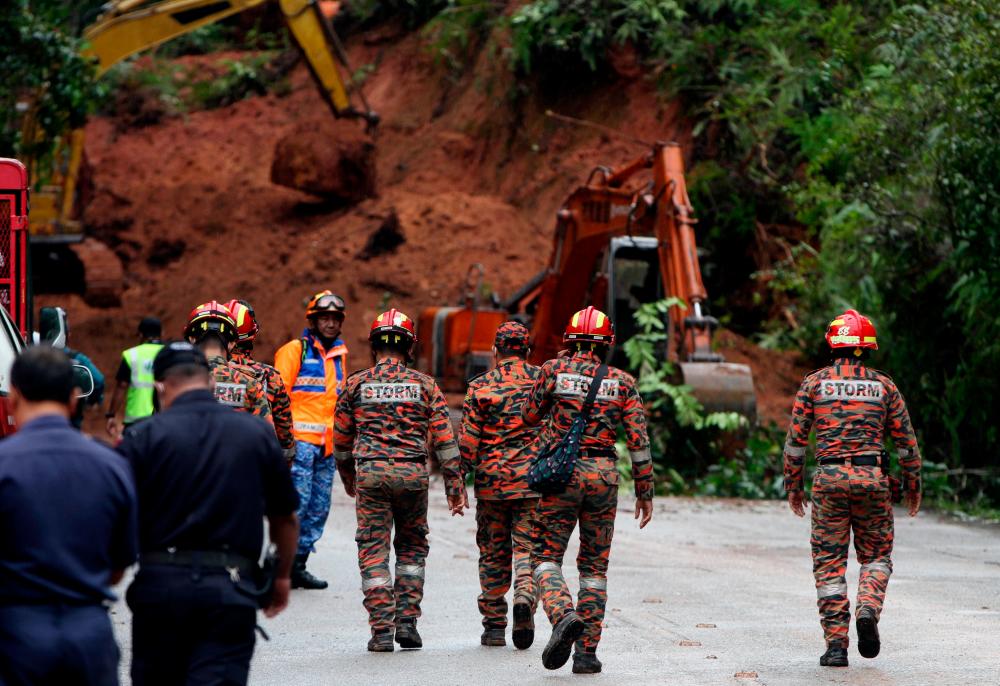 IPOH: Continuous rain has been identified as the cause of the landslide at Km 27.10 Jalan Simpang Pulai - Blue Valley that killed two people yesterday, according to the Public Works Department (PWD).

Perak PWD deputy director Ir Hamdan Ali said for the past two weeks the location had recorded a high amount of downpour (217 millilitres), adding that due to continuous rain the ground in the area began to soften and weaken causing the landslide.

“Based on our inspection, we discovered that the landslide brought down more than 10,000 cubic metres of soil,” he said to reporters after inspecting the site today.

Hamdan said clearing work would be carried out as a short-term measure.

“Because of the high volume of soil, we will need one week to clear the road and we will monitor the stability of the hill slope from time to time to find a long-term solution,” he said, adding that it was the first landslide incident to happen in the area.

“Parts of the slope are stable but other parts are not. So, we still need to study the slope. The length of the affected slope is about 100 metres,” he said.

He also said the route was expected to be re-opened on Dec 9 after all clearing work is completed and if the weather permits.

According to Hamdan, the hillslope between sections 38 and 48 of the area was found to be stable.

At a separate press conference, Perak Fire and Rescue Department acting operations director Muhamad Shahrizal Aris said two dogs from the K9 unit were used to determine if there were any other victims buried in the landslide.

“We might have to carry out two operations. If the result is negative for the first operation, we will conduct a second sweep and if the result comes back negative, we will decide to continue or terminate the operation,” he said.

Shahrizal however said the search team had not found any clues to indicate that they were other victims.

“For clearing work to continue or otherwise, we will wait for the recommendations from the Department of Mineral and Geoscience (JMG) to ascertain the danger level at the location.

“However, during our search and rescue operation yesterday and today, no soil movement was detected,” he said.

Their bodies were recovered last night.-Bernama