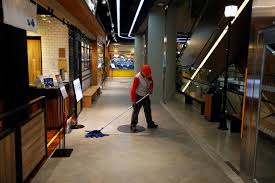 KUANTAN: A total of 16 contract school cleaners in Pahang are seeking justice as they claim to have lost their source of income after their contracts were suddenly terminated.

They claim to have been informed about the termination via a telephone call on grounds that the government was implementing a new tender format beginning this year.

Safiah Abdul Rahim, 54, who has been working at SK Keratong 4 in Rompin near here, for 20 years, said she has had to rely completely on the sale of oil palm after she had been laid off.

“I was informed about it by the school, not from my employer, that my contract had ended on May 31. There was nothing in black and white, and I lost my source of additional income.

“The price of palm oil is uncertain nowadays, while I have to bear the medical costs of my husband who has suffered a stroke,“ she said during a press conference here today.

Earlier, all the 16 contract workers lodged complaints with the Pahang Industrial Relations Department claiming that their contracts were terminated without notice nor proper compensation.

Another employee, Zalilah Salim, 59, said her contract had been terminated about a week before Hari Raya Aidilfitri, which resulted in her losing a monthly salary of RM1,100.

She claimed to have worked as a cleaner at SMK Tengku Abdullah in Pekan near here, for 20 years, and that she had now lost an important source of income.

Meanwhile, Industrial Liaison Officer A.Sivarajan said that the contract termination had made life difficult for the workers involved, as most of them were in the B40 income group.

“Most of them only earn around RM1,100, but some earn even lesser than that. That amount of money earned already forces them to live on a tight budget, what more now that they have been laid off,“ he said. — Bernama Muhyiddin to PM: Call for GE if you can’t manage economy I will remain with Umno forever, says KJ

Muhyiddin to PM: Call for GE if you can’t manage economy

I will remain with Umno forever, says KJ

4.Muhyiddin to PM: Call for GE if you can’t manage economy

5.I will remain with Umno forever, says KJ