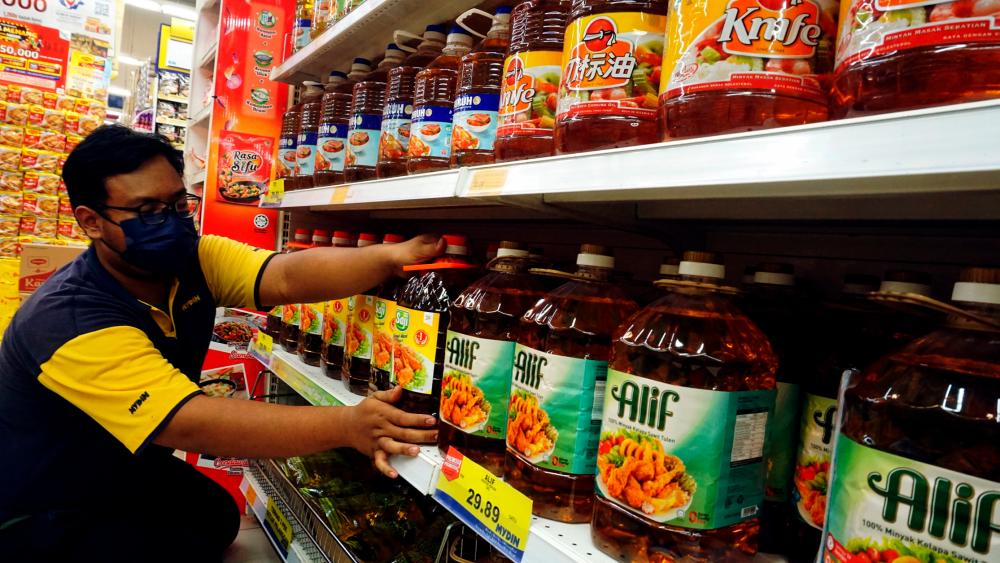 This month, the palm cooking oil in 5kg bottles are to be sold at RM34.70 each starting today. BERNAMAPIX

KUALA LUMPUR: The majority of traders are complying with the maximum price set for palm cooking oil in bottles with 17 per cent of them selling it below the maximum price, according to the chairman of the Special Task Force on Jihad Against Inflation Tan Sri Annuar Musa.

While expressing thanks and gratitude to the traders, Annuar said a survey conducted at over 200 business premises as of noon today found that the cooking oil was sold at the stipulated price on the first day of implementation of the maximum retail price.

“This is an encouraging development. We found that the cooking oil in 5kg bottles are sold at a price as low as RM28.90 each compared to the maximum price of RM34.70,” he told a press conference after chairing the meeting of the task force at the Parliament building here today.

Last week, the government announced that the maximum price for palm cooking oil in bottles was to be set on a monthly basis based on the price of one tonne of crude palm oil (CPO) announced by the Malaysian Palm Oil Board.

Hence, this month, the palm cooking oil in 5kg bottles are to be sold at RM34.70 each starting today.

Meanwhile, Annuar said the government will implement the ‘complaint window’ initiative to give the opportunity to the urban poor affected by inflation to channel their information so as not to be left behind in receiving government assistance.

“The urban poor is the group most affected by the rising cost of living and price hikes. Upon discussion with FT Minister Datuk Seri Dr Shahidan Kassim, we have agreed to begin the exercise in the FT.

“Those who are eligible but have not received any assistance for whatever reasons can lodge their complaints (through the complaint window). It is also for anyone with information on any eligible person who was not listed in the existing aid system to channel the information,” he said.

Annuar said the implementation of the initiative would be monitored by the Special Task Force on Jihad Against Inflation.

He added that the initiative was taken following the findings of a survey which revealed that there were urban poor families in Kuala Lumpur who had been left behind in receiving government assistance. - Bernama