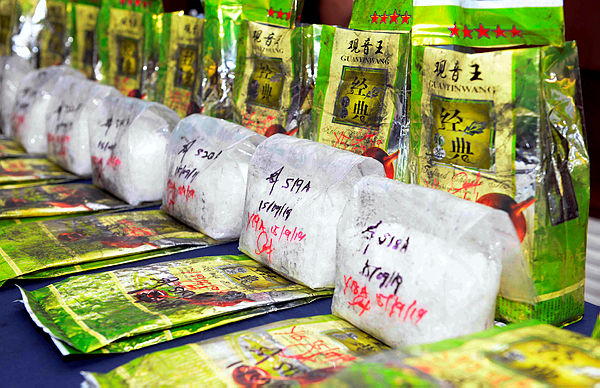 Police also arrested three men and seized a Nissan Xtrail, a Proton X70 and a Perodua Bezza besides a gold chain and five gold rings, all worth RM180,000.

Petaling Jaya district police chief ACP Mohd Zani Che Din said during the raid, the three men, between the age of 46 and 50, were packing the drug believed to be for local distribution.

“Police found a box containing two packets of Chinese tea which had two plastic packets of syabu hidden in them,” he told a press conference at the Petaling Jaya district police headquarters, today.

He said two of the men tested positive for the drug metaphetamine and one of them had a drug-related criminal record.

Police believe the activity was masterminded by syndicates and investigation found they have been active around the Klang Valley for the past six months.

The case is being investigated under Section 39B of the Dangerous Drugs Act 1952. — Bernama