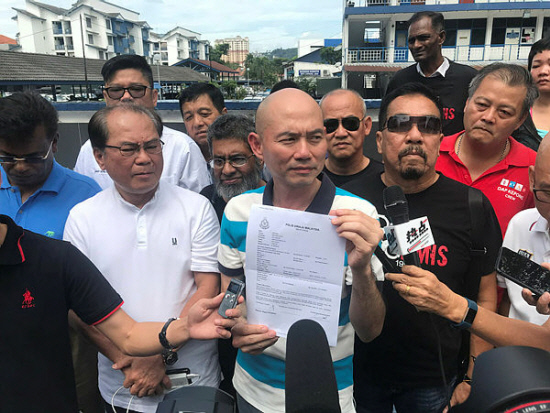 DAP lawmaker Lim Lip Eng shows off the police report on the case.

AMPANG JAYA: Police have initiated an investigation against a man who had berated a beer promoter in the non-halal section of a hypermarket here recently.

“I can confirm about the report. We have initiated an investigation under Section 509 of the Penal Code for word or gestures intended to insult the modesty of a woman,“ he told theSun when contacted.

Earlier, DAP lawmaker Lim Lip Eng had filed a report at the Ampang Jaya district police headquarters and told reporters he wanted the authorities to eradicate racial tension in the country, which he claimed was escalating after a video of a beer promoter being harassed by a man in the non-halal section of a hypermarket went viral yesterday.

Taman Segambut DAP vice-chairman Patrick Hoo, who was also present, said the party has attempted to contact the beer promoter through her Facebook account, but has yet to receive any response.

The 45-second video of the supermarket incident, which was first posted on Facebook by a user under the name ‘Edi Rejang’, has divided public opinion.

In the clip, a man is heard aggressively asking a female beer promoter about her race, and if she was offering samples of the alcoholic beverage to everyone in the supermarket.

Despite the confrontational attitude, the woman calmly explained that she was only offering the promotion to non-Muslims.

The incident, which reportedly took place at the Hypermarket in Ampang Point here on Sunday night, was later removed by ‘Edi Rejang’.

theSun has also tried to reach out to the victim but received no response. It is believed that the 18 year old girl got 7 A’s for her SPM last year and was temporarily working by promoting beer in the supermarket.

Meanwhile lawyer Khairul Azam Abdul Aziz has come out in support of the man on his Facebook account.

“Congratulations to this brother, next time when the promoter asks are you racist? Just answer: Yes I am f**ing racist to accept your f**ing grandma as our citizen. Cool. Enough is enough,“ he posted.