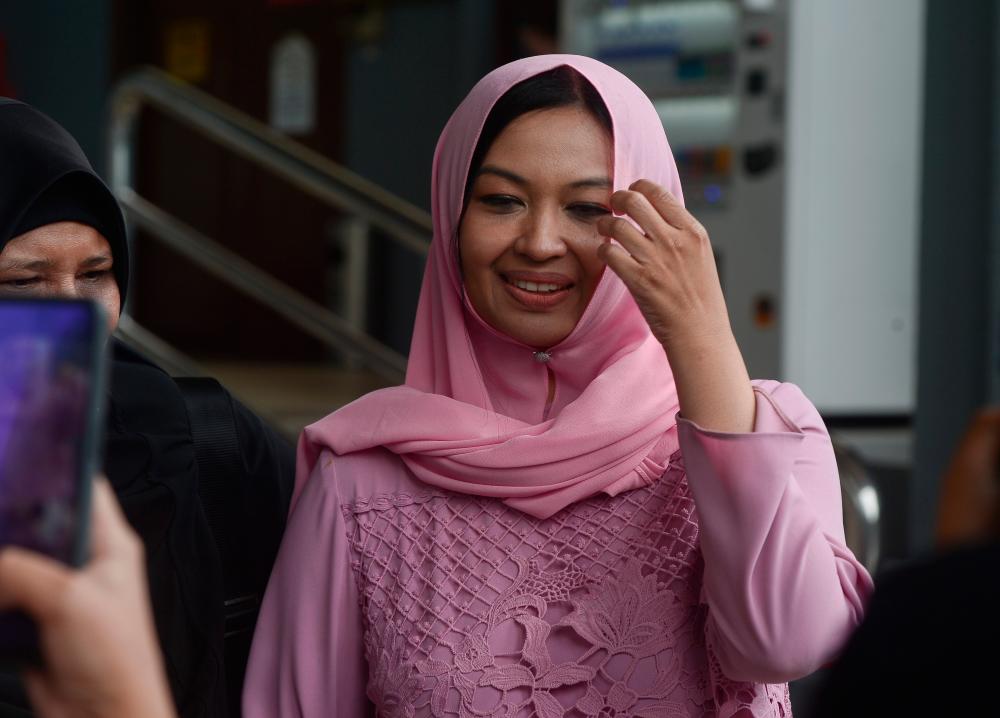 KUALA LUMPUR: The Magistrate’s Court here today warned Emilia Hanafi (pix), the former wife of Datuk SM Faisal SM Nasimuddin Kamal, not to use medical certificates as a ‘ticket’ to be absent in court for the trial involving the well-known businessman who is alleged to have injured her.

Magistrate Nadia Othman also quashed the arrest warrant issued against Emilia, 43, after she was satisfied with the woman’s explanation on her failure to appear in court several times for the trial.

“I would like to warn the complainant (Emilia) to be present in the next court proceedings and follow the procedures.

“Medical certificates are not a ticket to not appear in court. If necessary, as I asked Puan Emilia earlier, submit a medical report to confirm your condition and as proof for your absence. The trial will continue on July 15,” she said during mention of the case.

Earlier, deputy public prosecutor Nur Aishah Ahmad Zakiuddin applied to the court to revoke the arrest warrant against Emilia issued on June 15 based on the explanation given by her.

Meanwhile, Emilia who testified from the witness stand said she was absent on Dec 14 and 15, 2021, Feb 28, March 4, April 20, May 20 and June 15 this year due to her medical condition besides feeling stressed after an arrest warrant was issued against her by the Syariah Court involving an unrelated case.

Emilia explained that on April 20, she suffered from a dental problem before seeking treatment at a dental clinic at the Urban Transformation Centre (UTC) in Shah Alam, Selangor.

“On May 20, I decided to get a second opinion from the Tanglin Health Clinic. But, I opted for treatment in Shah Alam due to its better service and went to the Shah Alam UTC on June 15,” she said.

Nadia said she was satisfied with Emilia’s explanation before reminding all parties, including the accused, to appear in court for the smooth running of the case.

“I do not want this case to be postponed. According to my records, the case has been set for mention 38 times. It is your case, the court is ready, so you have to be present. I don’t want to hear lame excuses after this,” said Nadia.

SM Faisal was charged with intentionally causing injury to Emilia at a house in Desa Sri Hartamas, Brickfields here, between 12.30pm and 4.30pm.

The charge was framed under Section 323 of the Penal Code, punishable under Section 326A of the same law which provides for a maximum jail term of two years or a fine of up to RM2,000 or both, if convicted.

On June 27, Emilia was sent to Kajang Prison to serve a seven-day jail sentence for failing to comply with a Syariah High Court order on visitation dates for her three children. — Bernama