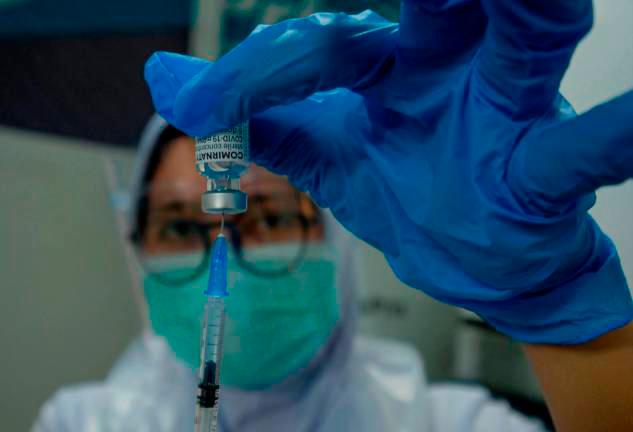 Pix for representational purpose only. -Bernama

KUALA LUMPUR: To be infected with the more aggressive and transmissible Covid-19 variants which is currently causing a surge in new cases, will definitely be a terrifying experience, especially for those categorised to be at high risk, including people who have asthma.

As such, health worker, Nurul Ezuahani Samad Fatimi, 32, is thankful to have completed both doses of the vaccine at the end of March, as this protective ‘shield’ had allowed her body’s natural defences to develop immunity against more serious infection.

Nurul Ezuahani, a radiographer at a hospital in the capital city, had mixed feelings when she tested positive on July 7, more so because she suffers from asthma and is overweight.

“My immediate concern was what is going to happen if my husband and two children are also infected, but luckily, as I was fully vaccinated, I was confirmed to be in category two of the Covid-19 infection.

“I only had mild symptoms of itchy throat and blocked nose. I can’t imagine how it would be if I had been infected with the more contagious and severe variants, before getting vaccinated. I don’t think I will be able to survive,“ she told Bernama recently.

It was a relief too she said as her husband and two children who live in the same house, were not infected.

Throughout her quarantine period in a hotel room, Nurul Ezuahani said she did not take any medicines but only took vitamin C supplements and maintained a healthy diet.

“From experience, it is learned that the vaccine will to some extent reduce the risk of infection to others as my close family members or friends were not infected, even when my test results showed that I had been infected long before I realised I was Covid-19 positive,“ she said.

A similar experience was shared by Muhammad Khuzaimi Ishak, 30, from Kuala Lumpur who also had mild symptoms of sore throat, stuffy nose and lost his sense of smell after he was confirmed positive in early July.

“The cycle threshold (CT) value detected during screening was low at 15 which was categorised as dangerous and showed that the virus is active in the body,“ he said.

According to him, although there is no guarantee that one would not be infected after getting vaccinated, he trusts that the vaccine would build some protection making him feel safe.

“While in quarantine for 10 days, I kept thinking how I could have suffered much worse than this if I had not been vaccinated earlier.

“My BMI (body mass index) too is not ideal so I imagine I would probably suffer shortness of breath, chest pains and get hospitalised too,“ said the former category two patients.

Khuzaimi, a radiographer at a government hospital in Kuala Lumpur said being fully vaccinated had given him confidence and motivated him from having negative thoughts in fighting the virus.

Earlier health director-general Tan Sri Dr Noor Hisham Abdullah was reported as saying that fully vaccinated individuals could be infected with Covid-19, but the likelihood of infecting others is low and they would experience less severe symptoms compared to those who have not been vaccinated.

2.Foster focuses on Springboks after All Blacks claim top spot