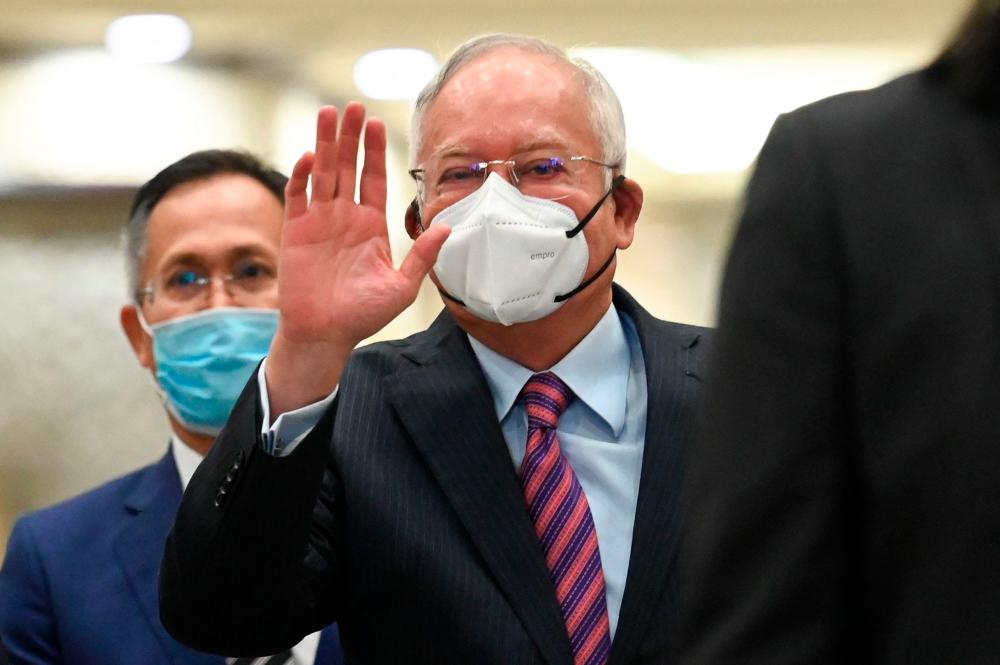 Malaysia's former prime minister Najib Razak (C) waves as he arrives at the federal court in Putrajaya on August 19, 2022. AFPPIX

PUTRAJAYA: The Federal Court here was told today that Datuk Seri Najib Abdul Razak had never made any enquiries with AmBank over the huge funds that were constantly credited and debited in his personal bank accounts until the accounts were closed in 2015.

Ad hoc prosecutor Datuk V.Sithambaram submitted that the former premier did not take any legal action against the bank for the alleged wrongful credits and debits of funds from his accounts.

“The evidence of two bankers from AmBank, namely, Uma Devi Raghavan and Joanna Yu Ging Ping showed that Najib had never made any enquiries with AmBank, let alone lodged any complaint, regarding the huge amounts of funds constantly entering and leaving his accounts.

“In fact, the appellant (Najib) had no problem with his bank balances until he closed his accounts in March 2015,“ he said at the hearing of Najib’s appeal against his conviction and sentence for misappropriation of RM42 million in SRC International Sdn Bhd funds.

He said this in his submission before a five-member bench led by Chief Justice Tun Tengku Maimun Tuan Mat.

He submitted that the transfer of funds in the accounts were made at the behest of the appellant by the trio and that the appellant solely benefited from the RM42 million credited to his accounts.

“The only issue is whether the appellant had knowledge of the RM42 million in his accounts when it was received. In any event, willful blindness is not a defence. Willful blindness is treated as the legal equivalent of actual,“ he said.

Sithambaram said that based on the entirety of the evidence, the Pekan MP willingly spent the funds for his own benefit and he certainly had knowledge of the RM42 million in his accounts.

He said it was futile for Najib to want the court to believe that he did not know about the RM42 million that was credited into his accounts.

However, he said, between June 2014 and February 2015, Najib was aware that he had only RM49 million from the alleged fourth Arab donation.

“That too he had used up, except for about RM6 million, made up of a cash deposit of RM5 million (not an Arab donation) before the arrival of the RM42 million. Therefore, the RM42 million arriving in his accounts would constitute a 100 percent increase in funds.

The hearing continues at 3pm. - Bernama