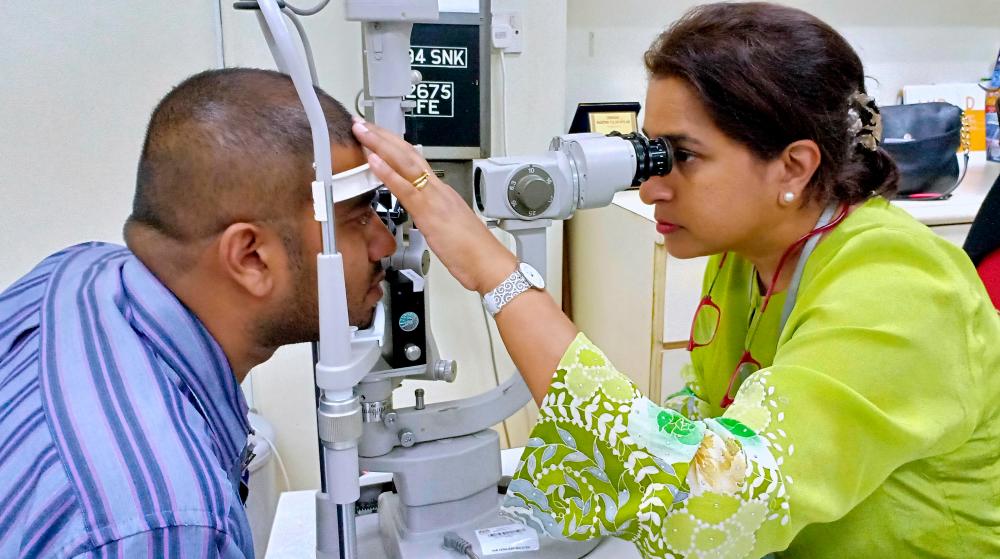 KUALA LUMPUR: The Covid-19 pandemic saw schools nationwide shifting to home-based online lessons, while working adults have been asked to work from home.

During this period, there has been an inevitable surge in the use of digital technologies as people and organisations have had to adjust to new ways of work and life.

Electronics have become part of our daily lives; distancing ourselves from our gadgets for just a day has become unthinkable. But too much screen time has its side effects on the eyesight.

We often hear of children developing short-sightedness or myopia due to prolonged exposure to gadgets or adults having eye strain after spending long hours in front of computer screens.

However, besides gadgets, several other factors have also contributed to eye health issues among people of all ages, whether consciously or unconsciously.

According to the World Health Organisation (WHO), unoperated cataract and uncorrected refractive error are the leading causes of vision impairment. Other causes include age-related macular degeneration, glaucoma, diabetic retinopathy as well as trachoma, a bacterial infection of the eye.

“ “Most genetically-related cases can be detected since birth or below six month-olds. Other than that, an absent red reflex whereby one pupil is white in colour is a sign of cataract in infants. For babies with glaucoma, the cornea should be transparent instead of cloudy,“ she told Bernama recently.

Dr Azlindarita who is also social media adviser to the Malaysian Advocacy for Myopia Prevention (MAMP) said for non-genetic factors, premature babies of less than 32 weeks or weighing less than 1.5 kg, have high risks of developing myopia if they have retinopathy of prematurity (ROP).

ROP is an eye disease that occurs in a small percentage of premature babies where abnormal blood vessels grow on the retina.

“Babies especially who have been admitted to the Neonatal Intensive Care Unit (NICU) after birth will be screened before being taken home by their parents.

“If they are found to be free from the disorder (ROP) after the screening, they will still be required to go through another yearly examination to ensure they do not have problems with their eyesight,“ he said, adding that normally, the routine checks will be carried out for this group up to six or seven years old.

A 2005 study shows that the rate of visual impairment among seven-year old children is 9.8 per cent while for 15-year olds, the rate is 34.4 percent.

“For children aged 5, if the visual acuity is -1.0, the child is not normal (eyesight) and requires frequent monitoring and needs glasses (on the specialist’s advice,“ she said.

Among the features detected among infants or babies with visual impairment are that they tend to squint their eyes when looking at far objects and they would bring objects such as books or toys closer to them as well as watching television at a close distance.

For those with serious cases of visual impairment, they would usually miss their steps given that they are unable to see objects around them.

“There are also infants and children who have abnormal head posture (when the head is deviated out of the normal primary straight head position). When watching television, they will turn the head to place an eye with better vision closer to the target.

“It may be easier for four-year olds and above to share their problem with their parents. Parents and teachers can gauge their behaviour and performance in school at this age,“ she said.

Gadgets the main cause

President of the Association of Malaysian Optometrists (AMO) Ahmad Fadhullah Ahmad Fuzai said, gadgets among infants and children could affect their emotional and mental state, in addition to exposing them to visual impairment risks.

Several local studies found that exposure to the screen of gadgets including telephone and television before two years of age have negative effects on infants.

According to the American Optometric Association, excessive exposure to blue light can damage the retina.

“For children aged between two to three years old, passive and prolonged exposure to television and without parents’ interaction are not encouraged as from birth to early childhood, children use their five senses to explore their world, which is crucial to brain development. The eye is a real window into what is happening in the body,“ he said.

“For three year olds, screen exposure helps them differentiate between reality and the virtual world and during this period, children learn most things through observation and imitation,“ he added.

Visual impairments are also prevalent among those who have poor dietary habits or picky eaters. Individuals who are deficient in nutrients include those with chronic alcohol abuse, incorrectly applied vegetarian diet, patients who undergo gastrointestinal surgery or those who suffer from anorexia nervosa.

Ahmad Fadhullah said, imbalanced diet for example, can cause individuals to be deficient in B12 and D vitamins, selenium, high zinc level, reduction in bone density and optic neuropathy or damage to the optic nerve characterised by loss of vision.

“An individual not only faces problems with their eyesight through their food intake but also failure to get the right nutrition for their body could also affect their eyesight. The situation is called nutritional optic neuropathy, a dysfunction of the optic nerve resulting from improper dietary content of certain nutrients essential for normal functional of the nerve fibres.

He also noted that consuming medicines that are easily available online but are not approved by the Ministry of Health, can have side effects on the individual’s eyesight.

“ This is because unregistered medicines normally contain high steroid content for the purpose of giving temporary relief.

“When these medicines are taken without doctors’ prescription, it can result in acute glaucoma and permanent blindness.

“Lubricant eye drops used widely as relief for eye problems are also feared to be harmful to the consumer. Hence, the authorities should control the sale of medicines that are not approved by MOH,“ he said.

Meanwhile, President of the Malaysian Society for Occupational Safety and Health (MSOSH), Dr Shawaludin Husin said, fatigue or eye strain faced by working groups can affect body posture or ergonomics as their eyes are too focused on the screen for a long period of time.

“Although the source is their eyesight, but it could have other health problems when the body appears to have been “locked” as they have to focus on carrying out a certain task to the extent that they neglect the importance of having a good posture.

“Among others back and waist pain, headaches, etc, as more time is spent staring at the screen. Some people suffer from sleep disorder due to the blue light from the screen that affects the hormonal balance of the body. Too much exposure to the blue light at night can result in decreased levels of melatonin.

“A human body should be sleepy or tired during dark and is awakened by bright lights but man-made lights affect the hormonal balance,“ he said.

At the same time, eye protectors such as dark sunglasses or those with UV protection can avoid the risk of cataract at an early stage.

“Excessive use of gadgets can cause eyestrain. Try to practise the 20-20-20 technique; the simple rule is that for every 20 minutes you spend looking at a digital device or computer screen, you should look at something else that is 20 feet away for a period of 20 seconds.

“Go for an eye check up at least once a year to ensure that your eyesight is at the optimum level. This also serves as an early intervention in order to prevent more serious problems from occuring. What is important is, eye exams at every age and life stage can help keep your vision strong,“ he added. — Bernama