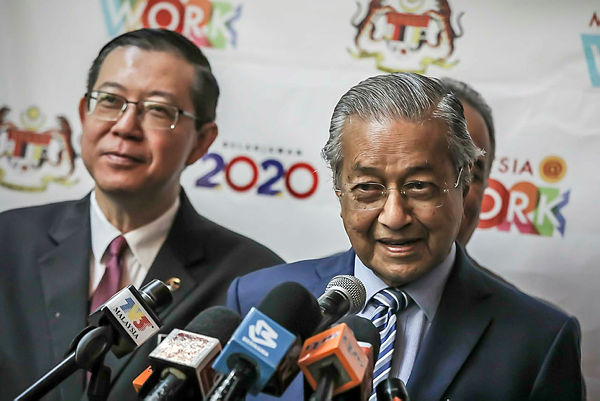 KUALA LUMPUR: There is a possibility of unrest in the country, like the ongoing Hong Kong protests, if the issue of youth unemployment is not addressed, Prime Minister Tun Dr Mahathir Mohamad has warned.

He pointed out that if a big proportion of the youth in Malaysia remained unemployed, this would create a fertile ground for discontent and instability.

Mahathir said, besides this, the country also risks losing their potential contribution to the economy, while the investments that have been made in the youth’s education would also go to waste.

“We cannot let that happen. All we need to do is to look towards places like Hong Kong, Beirut and Santiago to see how economically frustrated youths can bring about conflicts and unrest, worsening the already precarious and unstable economic conditions.

“So, as Malaysia strives to become a developed nation, we must ensure the prosperity we reap is shared among all, leaving no one behind,” he said during his keynote address at the Employees Provident Fund International Social Well-being Conference 2019, here, today.

Mahathir said to ensure this shared prosperity, the government and other stakeholders must spend time to assist those in vulnerable groups, particularly the youth, to secure quality and dignified employment.

He acknowledged that fresh graduates are the ones most impacted due to advancement in technology, with many jobs being displaced due to this.

“To thrive in this future one must be creative, adaptable, agile and prepared to expect the unexpected. Not many young Malaysians are equipped for this, and as such, many do not get hired or worst, unable to pick themselves up,” he said.

Commenting further, Mahathir said everyone has a part to play in overcoming the challenges caused by unemployment, as this will fester and affect all levels of society if left unchecked.

He said it was with this in mind that the government was introducing the Malaysia@Work programme, which looks to resolve employment challenges in the marketplace.

Under Budget 2020, the Pakatan Harapan government has set aside RM6.5 billion over the next five years to create up to 350,000 jobs.

Earlier in his speech, Finance Minister Lim Guan Eng said the programme would commence in stages beginning in the second quarter of next year.

“Basically, the wage and hiring incentives under Malaysia@Work will be credited directly into the individual’s EPF’s accounts, offsetting the statutory contributions by the employers and employees.

“Any excess amount of the wage incentive will be credited into a special account to be created by the EPF that allows for flexible withdrawal, any amount, whenever needed,” he said. Schools should refer to police before issuing notices on kidnap bids: Radzi Schools should refer to police before issuing notices on kidnap bids: Radzi

1.Maradona ‘Hand of God’ shirt to go on display during World Cup

3.Schools should refer to police before issuing notices on kidnap bids: Radzi