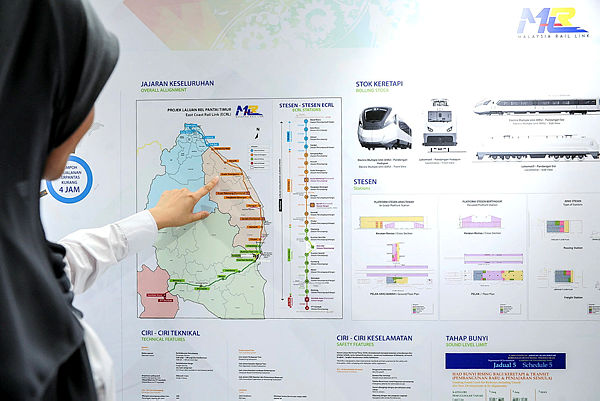 The original proposed route for the ECRL on March 8, 2017. The new route has yet to be revealed. — Bernama

FOLLOWING months of negotiations, Malaysia and China have reached an agreement to resume the East Coast Rail Link (ECRL) project, which was suspended last July.

It will be carried out on a smaller scale, and at a lower cost with some changes to the route, Sin Chew Daily reported today.

The daily learnt that the cost of the project, which was originally tagged at RM66 billion, will be slashed by more than RM10 billion.

A well-placed source told the daily that what the two parties had arrived at was a win-win solution as the re-negotiated project includes new commercial elements, which will bring about greater benefits to local entrepreneurs and people.

It is learnt that an agreement will be signed prior to Prime Minister Tun Dr Mahathir Mohamad’s visit to China at the end of this month, marking the resumption of the project.

The source said Council of Eminent Persons chairman Tun Daim Zainuddin, who is representing Malaysia in the negotiations, will fly to Beijing soon to sign the agreement.

Mahathir is scheduled to visit China from April 24 to 28 at the invitation of Chinese premier Xi Jinping to attend the second Belt and Road Initiative summit.

It is understood that Mahathir will address the summit and emphasise Malaysia’s support for the Belt and Road Initiative.

According to the report, environmental considerations are the main reason that changes will be made to the ECRL route.