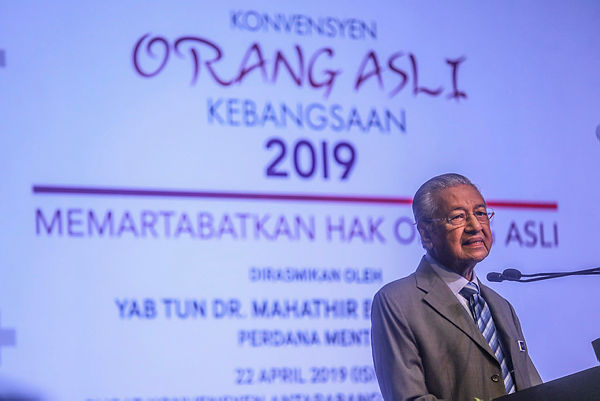 Prime Minister Tun Dr Mahathir Mohamad gives a speech at the opening of the National Orang Asli Convention 2019 at the Putrajaya International Convention Centre on the April 22, 2019. — Sunpix by Amirul Syafiq Mohd Din

PUTRAJAYA: Efforts to improve the level of education among Orang Asli students remains a top agenda of the government, according to Prime Minister Tun Dr Mahathir Mohamad today.

He said these efforts should be intensified with the cooperation of various parties through the provision of more education infrastructure and the inculcation of awareness through campaigns on the importance of education.

“This awareness and change should begin at home, that is among the Orang Asli parents,” he said when opening the National Orang Asli Convention 2019 at the Putrajaya International Convention Centre here.

Dr Mahathir said there were now 1,090 Orang Asli studying in various courses at public institutions of higher learning (IPTAs), apart from those who are pursuing their studies overseas at the degree, master’s and doctorate levels.

“These figures signal to the government that the Orang Asli community is aware of the importance of education,” he added. — Bernama

Dr Mahathir said the high achievements of Orang Asli students also show that the community is prepared and has leaders and intellectuals who can step forward to play a bigger and more significant role in setting the direction for the community and the country.

“Their highly encouraging achievements are surely the result of their own determination and hard work. But it also encourages the government that the policies introduced have helped to produce these excellent students,” he said.

To achieve the target of providing formal education to every Orang Asli, he said, the government would continue to help Orang Asli students through the Education Promotion Aid Scheme implemented by the Orang Asli Development Department (JAKOA).

In the aspect of infrastructure development for Orang Asli settlements, the government always gives attention to projects involving the supply of electricity and treated water, road construction and housing development, he said.

He said that based on the latest statistics, the government had provided village roads to 84% of the 853 registered Orang Asli settlements throughout Peninsular Malaysia, 80% with electricity supply, 79% with water supply and 82% with Hardcore Poor Housing Project (PPRT).

“The government is committed to these development projects, and it is hoped that all these facilities can be provided 100%, thus improving the standard of living of the Orang Asli community throughout the country,” he said.

Dr Mahathir said the government is also making efforts to improve their living standard through the generation of fixed and stable incomes under programmes implemented to strengthen Orang Asli entrepreneurs.

He said these programmes would be integrated with existing economic projects through training and guidance aimed at developing eco-tourism and agro-tourism for the Orang Asli.

“I am confident that the Orang Asli eco-tourism or agro-tourism sector can develop the community’s economy by providing job opportunities which will directly boost the income of handicraft makers, makers of forest-based downstream products, and thereby encouraging the community especially youth to venture into the entrepreneurial field,” he said.

The prime minister said every work initiative and development effort being implemented and to be implemented by the government to develop the Orang Asli community is in line with the human rights-based approach.

Dr Mahathir said this approach is aimed at ensuring that every planned development and welfare programme will benefit the community by not sidelining their interests and instead will safeguard their basic matters based on the Transparent, Free and Early Notification (IMABT) principle.

“This is very important to the government in ensuring that every policy that is developed has considered the interests of the Orang Asli community in Peninsular Malaysia, which is made up of 18 ethnic groups,” he said.

Dr Mahathir said several measures which are felt necessary to upgrade and strengthen JAKOA are being carefully considered so that the department will be more effective in discharging its responsibility to safeguard the interests of the Orang Asli and develop them.

He said this is the government’s commitment to fulfil Promise 38 in the Pakatan Harapan (PH) Manifesto to champion the well-being of Orang Asal and to implement changes for the sake of the interests and life of the Orang Asli community.

The prime minister said the government had moved the department and placed it under the Prime Minister’s Department (JPM) under the supervision of Senator P. Waytha Moorthy from the Rural Development Ministry previously to optimise the use of resources and ensure its direction and function are in line with the role of the department.

As such, Dr Mahathir said he hoped that the convention could come up with resolutions to continue developing the Orang Asli community, apart from helping the government to understand their problems and the approach and actions needed to tackle them.

Meanwhile, a representative of the Orang Asli Batin, Mohamad Nohing, from Kampung Orang Asli Bukit Rok, Bera, Pahang, in his speech said he hoped that the PH government could resolve the issue of loss of customary land which has beset the community.

“This land is like our life to us to ensure continuity in our living and to provide for our families. We do not have any property apart from customary land for cultivation and to harvest resources from the forests,” he said.

The convention was attended by 1,000 people who included tok batin, Orang Asli youths and professionals, academics, and representatives of government agencies and non-governmental organisations to gather feedback for the preparation of the National Orang Asli Development Plan.