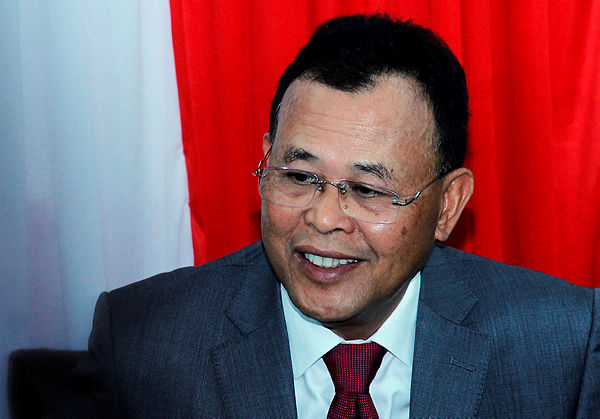 KUALA LUMPUR: It has been confirmed that former Johor Mentri Besar Datuk Osman Sapian (pix) is among the front-runners to represent Pakatan Harapan (PH) in the coming Tanjung Piai by-election.

PPBM secretary-general Datuk Marzuki Yahya said the Kempas assemblyman’s name was mooted by grassroot members recently, but that a final decision on the candidate to represent the coalition will only be made later.

“Yes, his name is among those shortlisted (for the Tanjung Piai by-election), but we have not made a decision yet,” he said when met by reporters at the Parliament lobby, here, today.

“His name was proposed by those on the ground, along with a number of other names as well,” he added.

There have been reports that Osman has been tipped as PH’s pick for the Tanjung Piai by-election, especially after pictures of him with congratulatory words went viral on social media recently.

However, he has denied these speculations, saying he had no knowledge of such claims.

When asked when PH was expected to announce the candidate for Tanjung Piai, Marzuki said it would be disclosed in the near future.

“We have suggested a few dates on when the name will be announced, but it is not final yet. We have several names with us now, and we will be deciding soon,” he said.

The Election Commission has set Nov 2 as nomination day, while polling will take place on Nov 16.

The Tanjung Piai seat fell vacant after its incumbent Datuk Dr Md Farid Md Rafik, who was also Deputy Minister in the Prime Minister’s Department, passed away on Sept 21 from heart complications.