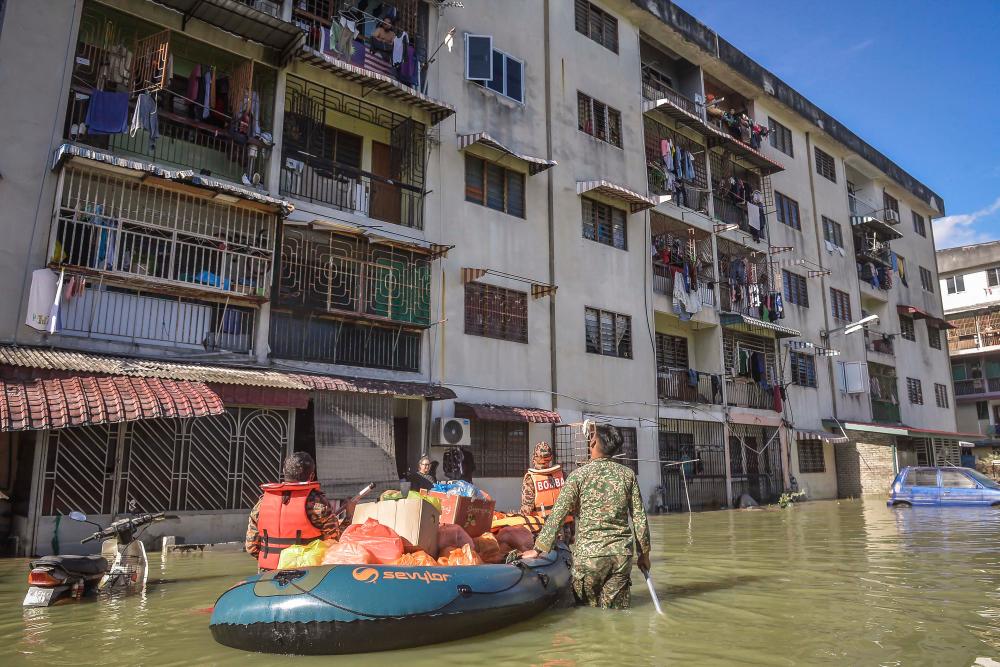 KUALA LUMPUR: The heavy downpour since early this month has triggered fear and panic among residents whose homes were ravaged by the massive floods on Dec 18, 2021.

The Malaysian Meteorological Department (MetMalaysia) has earlier predicted the monsoon season to begin earlier than expected, causing recurring periods of heavy rain and turbulent winds from Nov 7 until March next year.

Drawing lessons from the disaster, the relevant agencies are now fully prepared for the possibility of major flooding across Malaysia at the end of the year.

According to the Department of Statistics Malaysia (DOSM), the flooding that affected several states in the late of 2021 and early 2022 resulted in overall losses of RM6.1 billion.

In a special report released on Jan 28, 2022 on the impact of the 2021 floods, chief statistician Datuk Seri Dr Mohd Uzidin Mahidin said the losses are equivalent to 0.4 per cent of the country’s nominal Gross Domestic Product (GDP).

According to Prof Dr Noor Rosly Hanif from the Business Faculty for the Bachelor of Real Estate Management & Auction programme, International University of Malaya-Wales (IUMW), the December floods are likely to erode property value in the affected areas by as much as 30 per cent.

The catastrophe had directly impacted the property market as a whole as buyers refrained from investing or buying assets in areas identified as disaster zones.

“These are risks that property owners especially in several areas in the East Coast are likely to face due to the seasonal flooding in the two states of Kelantan and Terengganu.

“Elsewhere in Selangor, Kuala Lumpur, Johor and Negeri Sembilan, the massive floods at end-2021 in these states were non-seasonal.

“However, based on certain factors such as climate change, continuous heavy rain and high tide phenomenon which caused flash floods, property value in the affected areas is expected to fall in a knee-jerk reaction compared to the flood situation in the East Coast which could be forecast earlier,” he told Bernama recently.

The drop in property value is inevitable and among the options, owners can sell their existing assets to cut losses.

According to Noor Rosly, while the properly sector is largely dependent on supply and demand factors, buyers would avoid making any purchases in areas identified as ‘red zones.’

“For example, if a house in the area fetches a price of RM300,000 it may drop to RM250,000 or much lower if not much improvement is made to mitigate disaster risks in this area.

“However, selling of assets in disaster-prone areas is not easy as most potential buyers have factored in the background of the areas before making their purchase.

“As such, not much choice is left for asset owners; they either remain in the area and risk incurring further losses or sell their property at below market value,” he added.

He also said property value is not limited to floods alone but also other types of natural disasters such as landslide, soil movement and unstable land.

“Most areas in natural disaster zones or near disaster locations risk having their property value reduced although the situation is not permanent.

“As such, residents in flood-prone areas should be proactive by urging the authorities to improve the drainage and irrigation system or the flood mitigation measures to allow property value in these areas to return to normal,” he said, adding that several areas in Selangor such as Taman Sri Muda, Shah Alam are at high risk of major flooding.

President of Muslim Real Estate Consultants Association (PEHAM) Ishak Ismail said the negative impact from the downside in property value of disaster areas is only temporary.

Property value is expected to return to its normal level with the implementation of disaster risk initiatives by the relevant authorities.

He cited as an example, if an area is often hit by floods, falling property value would return to normal with the implementation of irrigation and flood mitigation measures by the relevant authorities.

“This is because the trend among buyers is that they will avoid or stay away from buying houses to live in or as an investment in areas which are vulnerable to natural disasters.

“As a result, these houses could not be sold at competitive prices but below the current market rates and these include rental value,” he said.

He said the relevant authorities should seek the best approach to reduce risks of natural disaster especially floods which could affect property value in the affected areas.

Ishak said although upgrading of infrastructure to mitigate flood risks is implemented, property value in the affected areas would not appreciate immediately and will take time.

“In the East Coast for example, we know that floods usually occur at year-end. We assume that after all the upgrading works have been implemented, property value in these areas would go up after one cycle that is after the end of the following year, with gradual increases in value,” he added.

Universiti Utara Malaysia (UUM) School of Economics, Finance and Banking senior lecturer Muhammad Ridhuan Bos Abdullah said in the short-term, floods would not have much impact on property value as neighbouring areas are still popular locations among buyers.

However, the time taken to rehabilitate and upgrade the infrastructure at flood-prone areas would certainly influence property prices, especially at new housing areas.

Citing the International Journal of Housing Markets and Analysis titled ‘Short-run Effects of Hurricanes on the Housing Markets: Evidence from Florida’ he said property value is expected to decline by more than 20 per cent.

“Given the advancements in risk assessment, technology and flood frequency studies, many insurance companies have offered benefits that are relevant to the current situation. However, asset owners in disaster prone areas will most likely see their insurance premiums increase.

“Some insurance providers are not willing to provide coverage due to high risks to floods and other natural disasters in certain areas,” he added.

He said as such, property owners not only have to cover existing insurance costs but also additional expenses to restore their damaged property due to floods.

“For areas that are considered difficult to undertake upgrading of the flood mitigation system, planned development and so forth, the owners should dispose of their assets at much lower prices compared to market rates to prevent from incurring yearly losses especially if their homes are located in seasonal flooding areas,” he added. - Bernama