Failure by Anwar to keep promises allowed representatives to attack me: Azmin 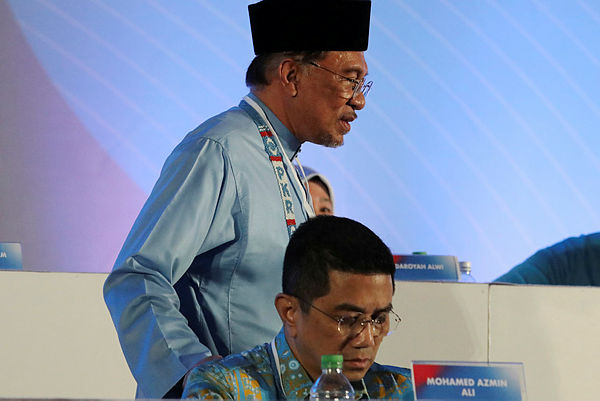 AYER KEROH : PKR deputy president Mohamed Azmin Ali claimed that party president Anwar Ibrahim did not keep his ‘promises’, and paved the way for representatives to ‘attack’ him and the “Muafakat Keadilan” leadership verbally.

In a press conference that was held at a separate venue, Mohamed Azmin said he had upheld the terms of a meeting held between him and party president Datuk Seri Anwar Ibrahim.

“Realizing the importance of strengthening the bond and cooperation between Keadilan members , the President and The Deputy President and as well as Keadilan Central leadership council members sat on a special meeting on Dec 4, 2019 to address the party’s leadership crisis based on several agreements.“

>> To uphold the party’s tradition and convention in the Opening ceremony with the National Congress of youth and women by the Deputy president.

>> The debate on the congressional stage will only focus on policy issues as well as the strengthening of Keadilan. The speaker should give focus on articulating the direction and future of Keadilan .

>> The list and composition of speakers is fair in terms of representing all parties and at the same time, to carry the party’s agenda.

>> The speaker is also not allowed to offend, insult and attack any parties because it would disrupt congressional objectives. The President assures that all speakers will adhere to the perimeters and lines as agreed.

Upon reading the terms, Azmin claimed Anwar had failed to keep his end of the bargain during the PKR Youth Congress and during this morning’s policy speech.

“He (Anwar) starts mentioning about Si Kitol and Raja Mandeliar, and this had opened the path for the debaters to attack me personally and break the unity of the leadership and members of Keadilan.

“The debaters for the policy speech were also one sided and had left out the grassroots voices as the speeches only brought up one man’s dream and brings down other leaders,” Azmin said.

“These shows how the president has failed to keep his promise to ensure the state debaters adhered to the speech perimeters agreed upon by both sides,” he said at the Ames Hotel lobby here today.

“In light of these regrettable incidents, we, the Members of the central leadership council

In response to this, Anwar told reporters that that the tale of Si Kitul and Raja Mendeliar which was used in his speech was not to attack Azmin and instead was a tale of betrayal and a part of Malay history.

“If he feels slighted, that is his problem. It was just a historical story,” Anwar said.

Anwar also said that he could not control the speeches made by PKR delegates during the debate on the president’s speech.

Scores of PKR delegates and members were seen leaving the convention venue earlier today, with some upset over the personal attacks launched on Azmin by delegates.

Efforts to eradicate underage marriage to be discussed

3.Efforts to eradicate underage marriage to be discussed