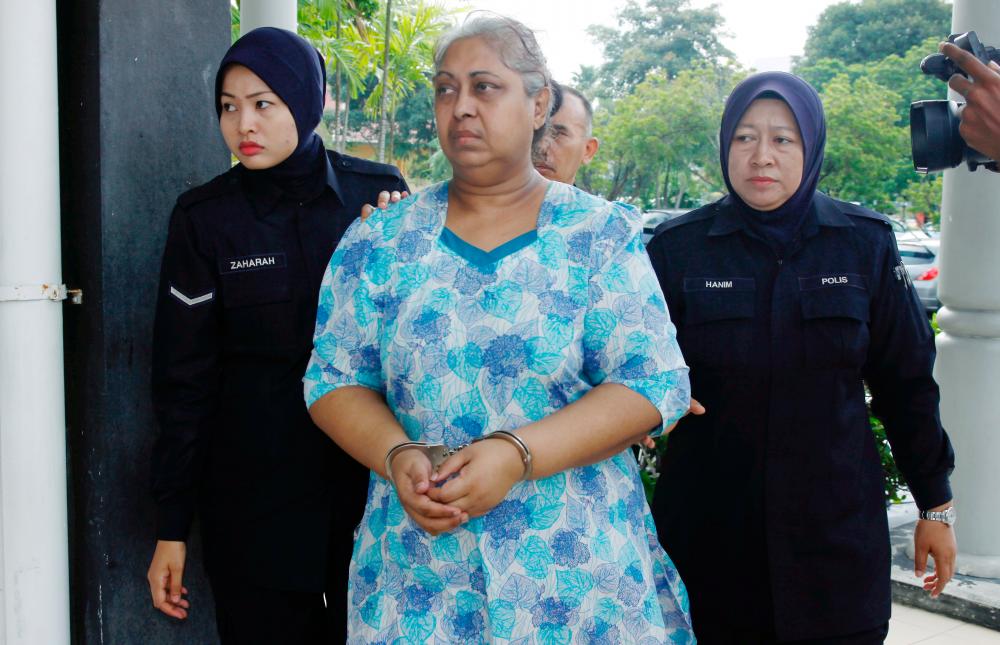 FILE PHOTO: BUKIT MERTAJAM 19 APRIL 2018. M. A. S. Ambika, 60, was escorted by policemen to the Bukit Mertajam Magistrate’s Court for re -mention in connection with the abuse of a 26 -year -old Indonesian woman at her home in Taman Kota Permai 2, Bukit Mertajam, Penang on February 10 2018. BBXpress

PUTRAJAYA: The Federal Court today upheld a High Court’s decision to acquit and discharge a housewife on a charge of murdering her Indonesian maid four years ago.

Deputy public prosecutor Datuk Mohd Dusuki Mokhtar appearing for the prosecution wanted the court to give S.Ambika a discharge not amounting to an acquittal (DNAA).

In the court’s decision, Justice Vernon, who chaired the panel, said that the High Court judge had exercised his discretion correctly to acquit and discharge Ambika.

He said the prosecution must give reasons on why it did not want to proceed with its case.

“We scrutinised the appeal records, there was no reason given by the prosecution ( in the High Court),“ Justice Vernon said, adding that a DNAA order could only be given if a good reason was provided.

On April 18, 2019, the High Court acquitted and discharged her although the prosecution had requested for a DNAA. The prosecution lost its appeal which was dismissed by the Court of Appeal in 2020.

Ambika, who was in a wheel-chair, was present in court.

Earlier, in today’s court proceedings, Mohd Dusuki had argued that the deputy public prosecutor handling the matter had requested for DNAA and told the High Court that she received instructions from her superiors not to proceed with the case at that juncture.

Mohd Dusuki said there was no valid reasons given by High Court judge Datuk Akhtar Tahir to acquit and discharge Ambika.

Evidence presented in the court showed that Y. Anbananthan, another lawyer for Ambika, had submitted a representation to the Attorney-General’s Chambers (AGC) on April 4, 2019 after three prosecution witnesses testified.

On April 18, 2019, the deputy public prosecutor informed the High Court judge that she did not want to proceed with the trial at that juncture and she could not give reason for asking for DNAA which led to the judge to acquit and discharge Ambika under Section 254 (3) of the Criminal Procedure Code. 5.Drop in number of unemployed persons in May 2022: Chief Statistician