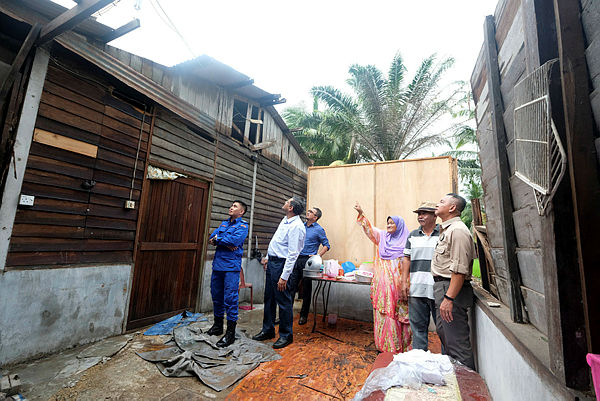 KUALA SELANGOR: The Federal and state governments will allocate funds to repair 488 homes in two districts in Selangor which were damaged in the storm on Saturday.

The special officer (economy) to the Deputy Prime Minister, Ameer Ali Vali Mohamed said they were currently in the process of assessing the extent of damage before consulting the Selangor government for the allocation.

“We are representatives from the office of the Deputy Prime Minister Datuk Seri Wan Azizah Wan Ismail who are today going to Sabak Bernam and Kuala Selangor districts here to see for ourselves the extent of damage to houses of the storm-ravaged residents.

“We were informed that in Sabak Bernam 443 homes were critically damaged, while in Kuala Selangor out of 45 damaged homes, only one was in a critical condition,“ he told reporters after visiting several damaged residential locations in the two districts here, today.

Ameer Ali said they were also working with various agencies including the Sabak Bernam and Kuala Selangor District and Land Office, as well as the National Disaster Management Agency (Nadma) to evaluate the damage.

“The district office in the affected area has been directed to collect information on complaints of damage to residents’ homes.

“So we will gather information and findings for presentation at the Selangor Economic Action Council meeting tomorrow, to facilitate the Federal and state governments to provide allocations to repair these houses,” he said.

On Saturday, hundreds of homes in the two districts including Sungai Besar, Sekinchan and Tanjong Karang were reported to have been badly damaged by the storm. — Bernama