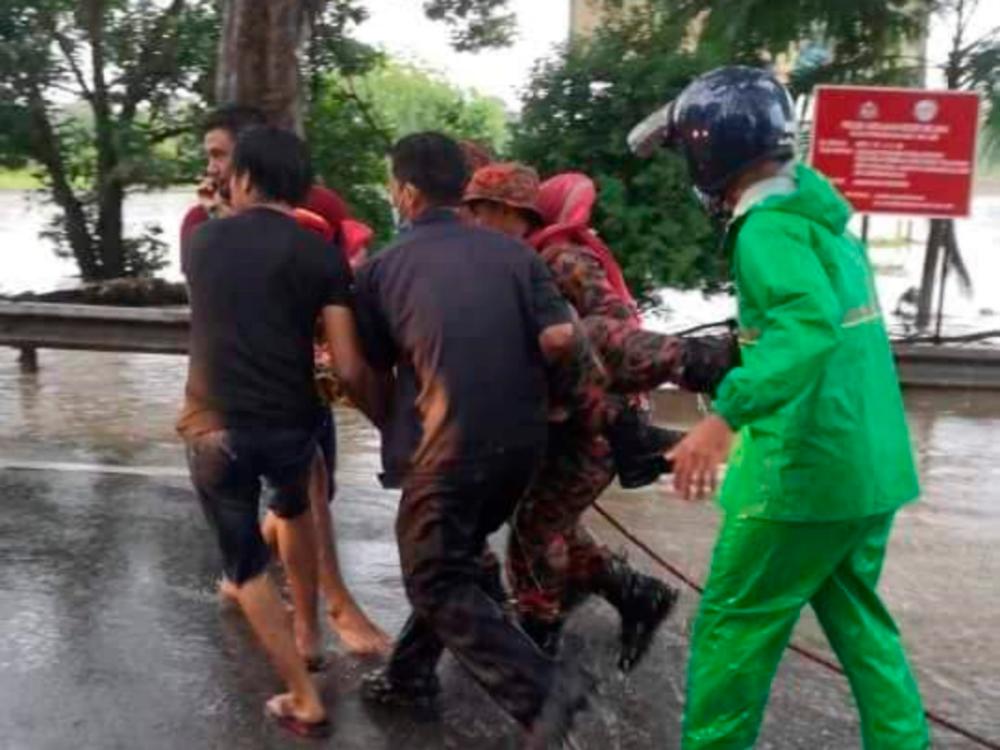 Firefighter Mohd Diya Che Jusoh (pix), 46, was believed to be securing a line in a flooded area to help villagers evacuate from their homes when he suddenly collapsed into the chest-high floodwaters. Fortunately, a fellow firefighter who was nearby witnessed the incident and he was rescued after nearly 10 minutes.

Melaka Fire and Rescue Department director Asst Comm Abu Bakar Katain confirmed the incident and said that the victim was being treated at the Melaka Hospital.

Meanwhile, three areas in Klang, Selangor were hit by flash floods due to continuous heavy rain since 3pm.

Selangor Fire and Rescue Department director Norazam Khamis said that as of 6.30pm, the area near Jusco Bukit Raja in Persiaran Bukit Raja 2; Lorong Emas 2 Taman Melawis and the area around Jalan 3 Off, Jalan Mohd Yamin, in Klang, near here were hit by flash floods.

“The flash floods in the areas were caused by clogged drains and water overflowing from rivers following heavy rain in the vicinity,” he said, adding that floodwaters were as high as four feet (1.2 metres) around Jusco Bukit Raja, Persiaran Bukit Raja 2, six feet (1.8 metres) around Jalan Mohd Yamin and one foot (0.3 metres) in Taman Melawis.

He added that residents were being evacuated from 35 houses in two of the three areas, especially from 15 houses around Jalan 3 Off Jalan Mohd Yamin.

“We are still identifying how many are affected and currently, no one has been moved to relief centres. Some parts of the Federal Highway, from Klang to Kuala Lumpur, are also waterlogged.

“As a result, five vehicles have been stranded there. The drivers were evacuated and are safe,” he said.

In Rembau, Negeri Sembilan, heavy rainfall also caused eight villages to be hit by flash floods this evening after several rivers broke their banks. A part of Jalan Pulau Mampat-Seberang Batu Hampar was damaged, rendering the road inaccessible to traffic.

“Meanwhile, Jalan Pulau Mampat-Seberang Batu Hampar was damaged at around 4pm and was closed off by the Public Works Department as it is currently unsafe for motorists.

“Jalan Linggi-Pedas at Sungai Ibor bridge is also closed to light vehicles as the river water level is still at danger level, around 600 milimetres (mm). Motorists can use the alternative route, Jalan Kundur-Pilin to get to Rembau town,” he told Bernama here, today.

He said that currently, no one had been evacuated and no relief centres were opened so far in the district.

Meanwhile, three districts in Melaka were also hit by flash floods following heavy downpours in the state since noon today.

He said as of 7pm, three flood relief centres were opened in preparation to house affected flood victims.

“We have yet to determine the number of evacuees as they are still being registered at the centres,” he said in a statement tonight.