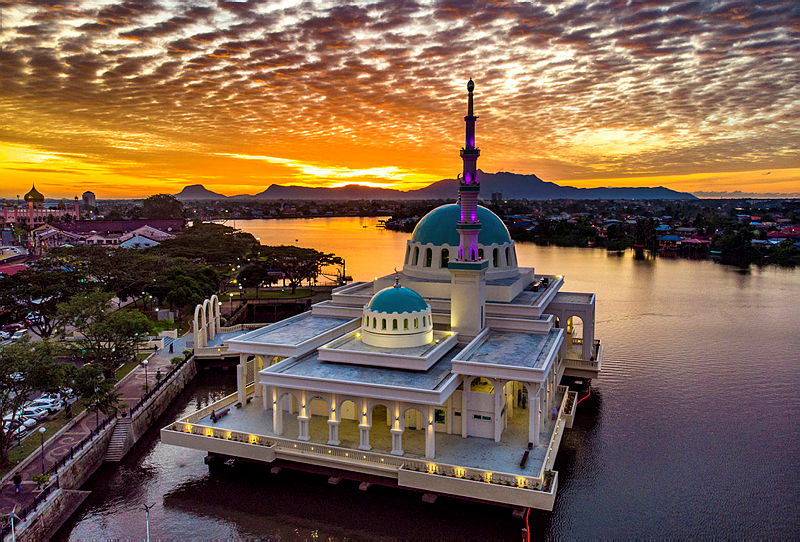 The floating mosque on the banks of Sarawak River. — Bernama

KUCHING: The Floating Mosque, located on the banks of the Sarawak River, is the latest attraction in the city after the Darul Hana Bridge.

The mosque, build at a cost of RM21 million, was officially opened by the Yang Dipertua Negeri, Tun Abdul Taib Mahmud on March 1.

Being able to accommodate 1,600 worshipers at a time, as well as having an attractive design it became a symbol of the greatness of Islam here.

At dusk, the panoramic view surrounding the mosque when it is flooded with the light of the golden sunset accentuates the majestic architecture.

In the evening, the Floating Mosque built on the Kuching’s heritage site will be illuminated by multi-coloured LED lights to increase the glow and ambience of the riverfront.

A local, Nur Apriyani Abdul Razak, 18, said he was fascinated by the beauty of the mosque’s unique architectural design, thus becoming the latest iconic Islamic landmark in Sarawak.

The mosque’s design inspiration is from the Middle East. It is also open to the non-Muslim public to give them an opportunity to see for themselves the unique interior designs.

Speaking at the opening ceremony of the Floating Mosque recently, Chief Minister Datuk Patinggi Abang Johari Tun Openg said the construction of the mosque, a brainchild of Abdul Taib, was in line with efforts to beautify the Sarawak River waterfront area. — Bernama