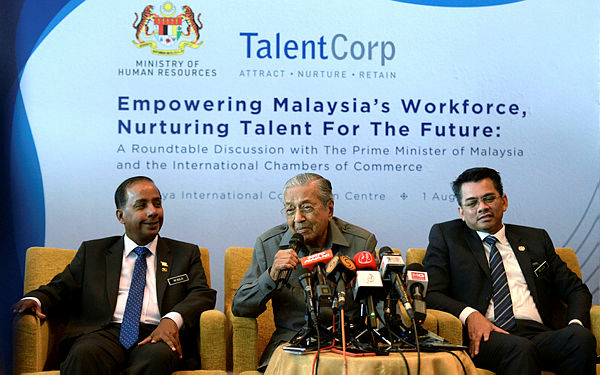 PUTRAJAYA: Tun Dr Mahathir Mohamad said the international chambers of commerce he engaged in a session on workforce and talent today has suggested that Malaysia’s education system should also focus on industrial needs.

The prime minister said they would like to see the country’s education system look at the kind of work that people would have to do when they graduate.

“Education cannot be more on arts side but on the industrial side. Of course, the German system is the best system, where one-third of the time is spent in the class and two-thirds is at the workplace,“ he told a press conference after chairing a round-table session with 30 representatives from 20 foreign chambers of commerce on “Empowering Malaysia’s Workforce, Nurturing Talent for the Future” here today.

Another issue raised by the foreign community at the round-table session, which lasted over an hour, was related to immigration where it was felt that talented people should have a longer period of time to be here, he said.

“One also complained that to invest in Malaysia, you must have at least RM1 million and this is a burden to some small industries,“ he said.

Asked whether the foreign chambers are keen to exchange talents, Dr Mahathir said: “Yes, they are willing to send their talents and we give them time for them to be here. We also like to send our people to study in their countries as well as to work in some of their industrial plants.”

“Today is about programming robots, automated machines. The skills are different, so what we need now is to train our people, to upgrade our people to higher skills, not just to assemble things but able to operate and maintain machines,“ he said.

Dr Mahathir said the round-table session was a good way of communicating with foreign investors.

Organised by Talent Corp Malaysia Bhd, the dialogue is the first of what is planned to be a series of engagements between the government and foreign business community, aimed to be a dedicated platform to contribute ideas to strengthen Malaysia’s standing as a preferred investment destination.