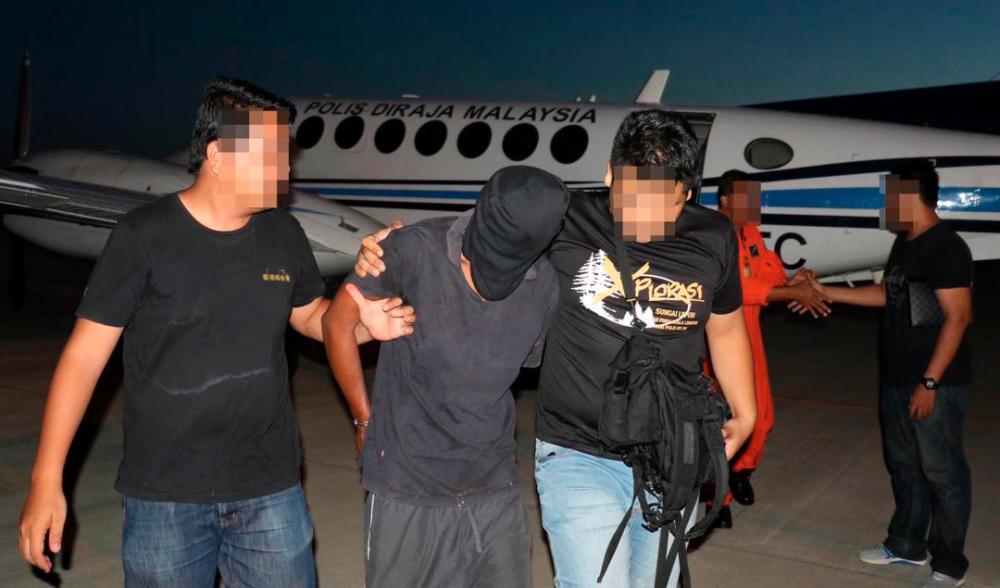 One of the suspects being escorted by the authorities.

KUALA LUMPUR: Police have arrested four men who were believed to have been planning terror attacks and assassinations in Malaysia to avenge the death of firefighter Muhammad Adib Mohd Kassim.

The suspected militants, comprising two Rohingyas, one Indonesian and one Malaysian, were picked up in Kuala Lumpur, Subang Jaya and Kuala Berang in Terengganu from May 5 to May 7.

Hamid said the four had targeted not just houses of worship but also four high-profile personalities as well as entertainment spots for attacks to be carried out during the month of Ramadan.

He said one of the group’s main objectives was to avenge the death of Adib, who was critically injured when he and his colleagues responded to an emergency call at the Sri Mariamman Temple in Seafield, Selangor on Nov 27, last year. He succumbed to his injuries on Dec 17.

The operation to nab the militants was launched after police learned that a ‘wolf pack’, or IS cell, was planning attacks in the Klang Valley.

Hamid said that during interrogation, the suspects revealed that the personalities they targeted were supposed to “protect the sanctity of Islam” but they failed. “I can’t reveal the names of the VIPs. It’s too sensitive,” he said.

On May 5, police arrested the 34-year-old Malaysian, believed to be the mastermind, in Kuala Berang.

The 20-year-old Rohingya, who had a UNHCR card, admitted his support for the Arakan Rohingya Army terror group when he was arrested on May 7. He had planned to attack the Myanmar Embassy in Kuala Lumpur before performing a jihad in Rakhine, Myanmar.

The remaining two suspects were detained in Subang Jaya and Old Klang Road on May 7.

Police are now looking for three more members of the terror group.

Two of them — Syazani Mahzan and Muhammad Nuurul Amin Azizan, both aged 27 — were last seen in Bedong, Kedah and police believe they are planning to attack places of worship.

The third man is an Indonesian individual named Fatir Tir, a labourer, who was last spotted in Banting, Selangor.

Hamid urged anyone with information to contact investigating officer ASP S. Manivanan at 017-3278435, or any police station.

He said police believe the weapons and bombs they confiscated may have come from Syria, and are trying to find the IS member who is most likely to have been in contact with the three suspects.

“Whether or not officers are in uniform, they are part of the police force and have a sworn duty to protect,” he said. 2.1,100 work orders for maintenance of facilities at BSI CIQ completed