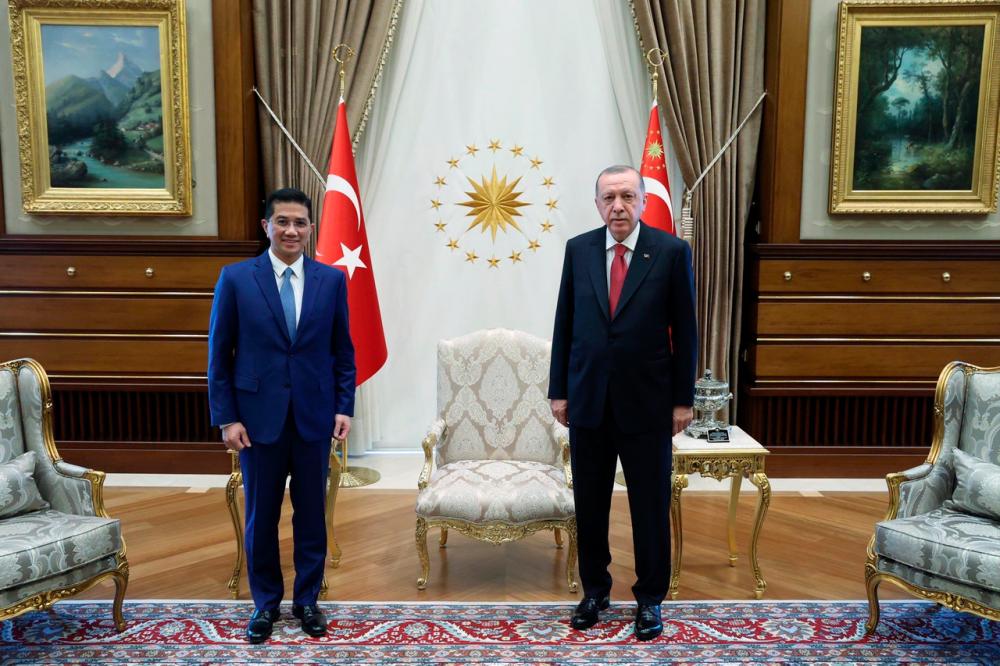 Senior Minister and Minister of International Trade and Industry Datuk Seri Mohamed Azmin Ali paid a courtesy call on the President of the Republic of Turkey Recep Tayyip Erdogan today at the Presidential Complex.-Bernama

KUALA LUMPUR: Malaysia-Turkey bilateral trade is set for stronger growth with the expansion of the Free Trade Agreement (FTA) between the two governments, the Ministry of International Trade and Industry (Miti) said.

In a statement Wednesday, Miti said Turkish President Recep Tayyip Erdogan underscored the importance of elevating existing trade and investment linkages between Malaysia and Turkey, including through the Malaysia Turkey FTA (MTFTA).

“The president noted that the full potential of trade volume between Malaysia and Turkey has yet to be realised. He further highlighted the need for both countries to work closely to increase the existing trade volume,” it said.

The ministry said Senior Minister and Minister of International Trade and Industry Datuk Seri Mohamed Azmin Ali paid a courtesy call to the president at the Presidential Complex.

It said Erdogan was also joined by the Turkish Minister of Industry and Technology Mustafa Varank as well as the Ambassador of Turkey to Malaysia Merve Safa Kavakcı.

“President Erdogan expressed Turkey’s solidarity in being together with Malaysia to curb the Covid-19 pandemic. He also indicated keen interest to work closely with Malaysia to arrive at a mutual recognition arrangement for vaccines,” it said.

It said with the trade volume continued to be in Malaysia’s favour, Mohamed Azmin underscored Malaysia’s commitment to enable further imports from Turkey to access the Malaysian market.

Miti said Azmin noted that the expansion of the existing FTA would be pivotal to facilitate and increase Turkey’s exports to Malaysia.

It said in reinforcing this mandate, Mohamed Azmin highlighted the meeting that the signing of the Joint Declaration on The Expansion of The MTFTA marked a resolute commitment to continue to champion progressive liberalisation at a time when new forms of protectionism are taking root.

On defence, Miti said both sides have agreed to enhance mutually beneficial cooperation initiatives that would help propel technological advancements in Malaysia and Turkey.

“The president noted that there are 14 Memorandums of Understanding (MoUs) in the defence sector, that are currently in place. He stressed that realising these MoUs are of critical importance to ensure that both sides truly gain from such arrangements,” it said.

It said the meeting also agreed that preferential trading arrangements such as The Regional Comprehensive Economic Partnership (RCEP) agreement could serve as an integral tool to Turkish companies investing and locating in Malaysia as they would be able to benefit from the preferences granted in the agreement when exporting to Asean, Japan, Korea, China, Australia and New Zealand.

It added that the meeting ended on a high note with both the president and the senior minister reiterating their conviction that Malaysia and Turkey would continue to foster, strengthen and deepen bilateral economic, trade and investment linkages.

Malaysia and Turkey signed a joint declaration on the expansion of MTFTA on Tuesday to reinforce the mandate in pursuing the expansion of the agreement to include chapters on services, investment and e-commerce.