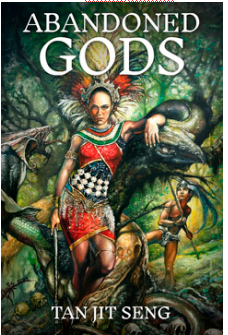 PETALING JAYA: Adding to its list of published works, Gerakbudaya launches Abandoned Gods by Tan Jit Seng, a novel inspired by Dayak culture that revolves around the story of Nira, a mother trekking the dark interiors of Sarawak with her sick child, Aji Riwut on her back to the Kuching General Hospital. Along the way, she meets demons, spirits, ghosts and ghouls of Dayak lore and receives boons from the forgotten gods of her Kaharingan faith. Set in the days of the headhunting era, she gets caught in an epic tripartite war between the bunsu antu animal spirits, antu utai tumboh plant spirits and the antu gerasi huntsman ghosts. Things escalate out of control when the antu menoa river spirits and the antu pantang tattoo ghosts get involved which makes her journey all the more dangerous and ardous. It is a story of blood and tears that breaks heaven and hell with twists spanning across time and space.

“I got the inspiration from an article I read in some newspapers a long, long time ago,” Tan Jit Seng, the author said. “I remember it was a plea for a hospital in some remote village in Sarawak and was saddened by how a mother had to carry her child on her back and trek the dangerous jungles of Sarawak to go to the general hospital in a faraway township for the sake of her child.”

He remembered crying at the mother’s sacrifices and imagined how terrified it must have been for the mother and child. The Journey to the West stories came to his mind, and his imagination spiraled out of control thinking of the ghosts and beasts that might stand in their way.

It formed the premise of his story and the title came about when he stumbled upon abandoned altars and statues at the foot of a huge tree later that day. “I remember being overwhelmed by a profound sense of sadness,” Tan Jit Seng recalled wistfully, “Of how a god was callously used, abandoned and forgotten after being worshipped.”

It was this sense of abandonment and feelings of loss and sadness that coloured his book, aptly entitled, Abandoned Gods.

“I felt compelled to be the storyteller,” he said. “It almost felt like it was a Heaven-sent idea for me to tell the story and I pray I did justice to it. If I didn’t, I humbly apologise now.”

“It was a slight departure from Gerakbudaya’s usual fare,” Mr Jason S. Ganesan, head of publications admitted, “but it was a risk worth taking.” Afterall, one must blaze new trails to make historic breakthroughs. The fact that the Dayak community is under-represented in Malaysian literature is another deciding factor to go with the book.

It has also been noted that this book didn’t just borrow the Dayak characters from myths of yore but actively created new story arcs for them. The new characters mingled with the old ones, driving the plots to its epic conclusion.

The book also has the distinction of being Tan Jit Seng’s first full-length horror fantasy novel, what with his previous works being short horror stories and children’s books.

“It was such a joy to have played a part in the production of this book,” Jason said, “I hope the readers will find it as thrilling to read as it was for me to edit it.”

“Oh, I hope so too,” Tan Jit Seng said with a hearty laugh. “I can only pray that someday,

Abandoned Gods can be made into a movie directed by James Wan and starring Henry Golding since they all hail from Sarawak.”

If that comes to pass, many local talents, especially those from the Dayak community would have the opportunity to shine. Maybe, it would be a good idea to approach Astro or Netflix after the launch, he reckoned.

Abandoned Gods is available at all major bookstores nationwide. Purchases can also be made at: www.gerakbudaya.com and Shopee online stores.