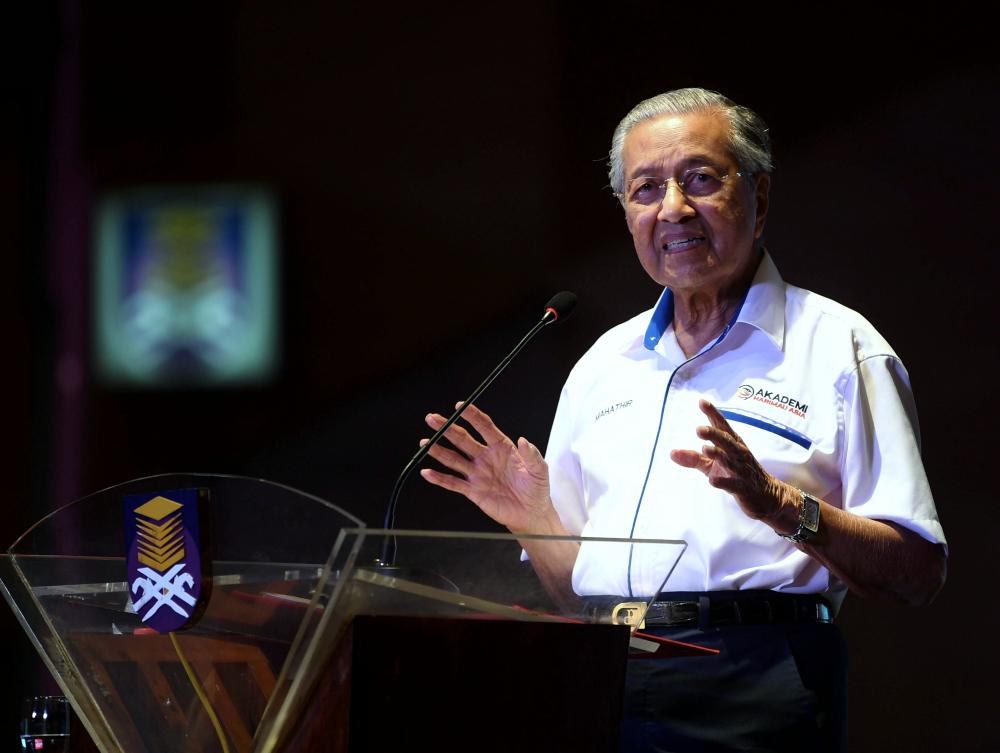 SHAH ALAM: Hard work, knowledge and trustworthiness are the keys to success for the people and the country, Prime Minister Tun Dr Mahathir Mohamad said.

He said these three life values had a strong influence on one’s everyday life.

“The first life value is hard work. If you are smart, but you don’t read, you won’t succeed, but if you are not so smart, but you work hard to chase knowledge, InsyaAllah, you will. That is why if we want to be a successful nation, our people must have these two life values - hard work and good knowledge of our fields.

“Expertise comes from hard work in chasing knowledge. That is all we ask from the young generation because we, the older generation, did not have that opportunity anymore. University students, especially student leaders, must nurture these values as it will bring success to our efforts to improve ourselves, our people and our country,” he said.

The Prime Minister said this in his keynote address titled ‘Malaysian Resurrection as the Asian Tiger’ at the Rise of the Asian Tiger Convention at the Universiti Teknologi Mara (UiTM) here yesterday.

Dr Mahathir also launched the Asian Tiger Initiative at the one-day convention aimed at providing exposure and knowledge to empower the country’s values system supported by the Youth and Sports Ministry.

The Asian Tiger Initiative is a national narrative re-affirmation to develop Malaysia by taking the spirit of Asian Tigers of East Asian countries which have earned global recognition as developed nations because of their rapid and vibrant economic growth.

The prime minister also drew attention to the third value of life, which is trustworthiness, especially in terms of debt.

“In our country, there is a thinking that debt need not be repaid, when we have such an opinion, then we will have a lot of catastrophes ... not just us but our race, our nation. When someone stingy doesn’t repay his debt, he can’t borrow from anywhere because he is the type who doesn’t repay his debt.

“That’s why we must be trustworthy and repay whatever we owe, even if we borrow from banks we have to pay back. We hear stories of PTPTN borrowers who have money but do not want to repay their debt because they are not ashamed. If we know what shame is, we will work hard to pay back our debt before using the money for ourselves. This kind of people will not face any difficulties in life.

“If someone has never settled his debt, is lazy to repay his debt, then he will fail. Even if you have knowledge and are hardworking, you will fail if you do not settle your debt. I believe that if we practice these three life values (hard work, knowledge and trustworthiness) our race and nation will be successful and we will become a developed country,” he said.

Dr Mahathir then reiterated his admiration for the ability and the success of the Japanese people whom he said should be the emulated by the people of this country.

He said the Japanese people had a very strong sense of shame if they failed to perform a task.

“Their sense of shame is very strong, the effect on their lives is that they will avoid the embarrassment of being a failure. That is why when the Westerners succeed in one area, they (the Japanese) will go into the same field and work to master the language, skills and capabilities until they succeed in being better than the Westerners.

“I believe Malays, in particular, can be successful like the Westerners but they have to hold on to good life values. We have to re-evaluate ourselves, our life values and our weaknesses ... if we can accept our faults and improve ourselves, then we can succeed,” he said. — Bernama