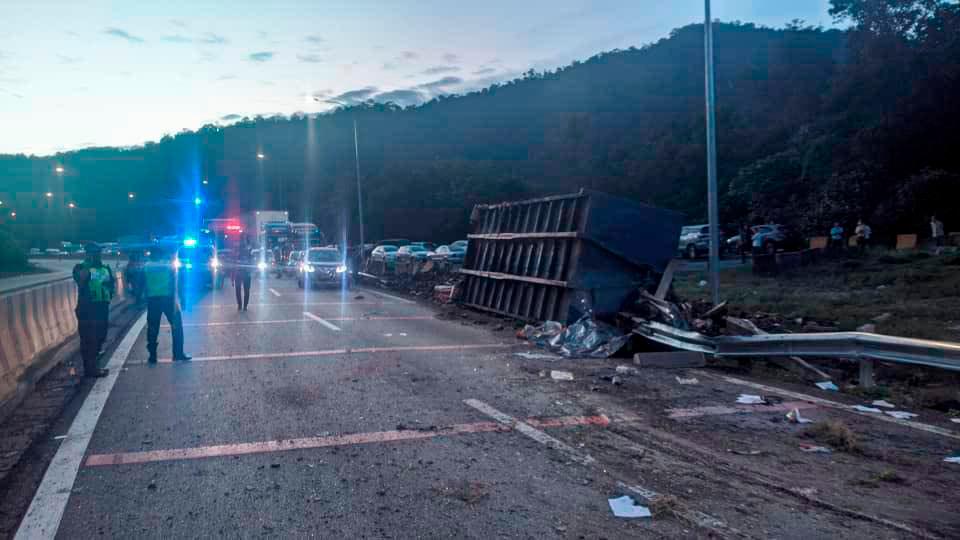 KUALA LUMPUR: To earn higher commissions by “chasing trips”, drivers of heavy vehicles are willing to forego their rest time and even exceed the speed limit.

Their commissions can go up to RM100 per trip, depending on the weight and type of load they are transporting. More trips a day mean more money to take home. This was exactly what a sand truck driver, who only wanted to be known as Kamal, told Bernama.

Kamal, 34, who works for a logistics company in Segamat, Johor, said he makes three trips to and fro Segamat and Johor Bahru daily, all within 18 hours.

“I’ve never made fewer than three trips. In fact, I’ve also made four trips but this is rare,” he said, adding that he is forced to squeeze in as many trips as possible per day to obtain bigger commissions as his basic pay is low.

“To tell the truth, I’m not the only one ‘chasing trips’, many other lorry and trailer drivers are doing the same. Usually, drivers plying medium-haul routes, such as Kuala Lumpur-Ipoh and Segamat-Johor Bahru, are the ones who tend to chase trips.”

Kamal also admitted to exceeding the speed limit to ensure he could meet his daily “quota” of three trips. He knew only too well that haphazard driving can lead to accidents and agreed that brake failure is not the main culprit in fatal road accidents involving heavy vehicles.

In the first part of its special report on the many fatal accidents in the country involving heavy vehicles released yesterday, Bernama revealed that malfunctioning braking systems are not the sole cause of such incidents.

In fact, based on official statistics and the views of experts, other factors for such accidents include road conditions and speeding as well as the negligence and attitude of the drivers themselves.

Kamal also said that he has heard of drivers who use prohibited substances such as drugs and ketum to stay alert and energetic whilst driving.

“I admit to chasing trips... I also admit to not taking a break whilst driving but I don’t use drugs. I would drive more slowly whenever I feel drowsy,” he said.

According to him, more often than not, many of them exceed the specified speed limit so that they can make more trips a day.

He also spoke of employers who want the goods delivered as fast as possible to their customers, thus leaving the drivers with no choice but to speed.

“Yes, there are employers who want their goods delivered fast but most drivers speed because of the higher commissions they would get (by making more trips),” he added.

Meanwhile, a study carried out by Universiti Putra Malaysia (UPM) in 2021 showed that offences commonly committed by drivers were related to their driving style and attitude.

According to its findings, Malaysia recorded 370,286 road accidents (both fatal and non-fatal, involving all types of vehicles) throughout 2021 or an average of 1,014 a day, or one accident every 86 seconds.

Ironically, out of the 11,627 fatal accidents recorded that year, only 170 were caused by vehicles that experienced mechanical problems, namely brake failure.

The remaining collisions were mostly attributed to speeding, reckless driving and taking corners dangerously, as well as violating traffic lights, tailgating, exiting or entering an intersection carelessly, overtaking other vehicles dangerously and overloading.

The UPM study clearly showed that the attitude of drivers is the main factor contributing to road accidents, including those involving heavy vehicles.

Is there a cartel?

Besides brake failure, other technical problems that can lead to accidents are defective lights, balding tyres and excessive smoke.

As such, under the Road Transport Act 1987, all commercial vehicles must undergo routine inspections every six months at Malaysia’s national computerised vehicle inspection centre, operated by Puspakom Sdn Bhd, to ensure they are roadworthy and safe to be used on the roads.

Unfortunately, certain logistics companies are said to be resorting to foul tactics to get their vehicles approved by Puspakom.

Prof Dr Rozmi Ismail, an expert in traffic psychology and road safety from Universiti Kebangsaan Malaysia, said that based on his observations and information from trusted sources, among the tactics used are repainting the vehicles concerned and temporarily replacing their old tyres with new ones before changing them again once the inspection is over.

This, apparently, is just a ploy to hoodwink the Puspakom officers into thinking that their vehicles are in good condition. In reality, said Rozmi, those vehicles may not even have been maintained regularly by their owners in view of the high cost of maintaining heavy vehicles.

He also did not discount the possibility of the existence of a “cartel” that is making it easier for certain companies and drivers to secure Puspakom’s approval for their vehicles to be used.

Elaborating on this, he claimed that he has received information that certain members of Puspakom’s staff are believed to be in cahoots with some drivers or logistics companies.

“I’m not making any accusation but based on what I’ve heard and feedback from the public, there might be a cartel that’s controlling this industry, to the extent of making it easy for commercial vehicles that don’t meet the required specifications to easily pass the inspection (at Puspakom).

“Whether these allegations are true or not, they must be investigated,” he said, stressing that the issue must be addressed immediately considering that the vehicles concerned pose a danger to other road users.

Meanwhile, on the issue of whether the existing legislation has to be reviewed to provide for heavier sentences for drivers convicted of flouting the law, lawyer Muhammad Nabil Fikri Mat Aji said the Road Transport Act has sufficient provisions to deal with traffic offences, including reckless driving.

He said under Section 41(1), for example, any person convicted of driving recklessly or speeding faces a jail term of two to 10 years and a fine ranging from a minimum of RM5,000 up to RM20,000.

Under Section 42, any person found guilty of driving recklessly and dangerously at a high speed and endangering public safety face a jail term of up to five years and a fine ranging from a minimum of RM5,000 up to RM15,000.

Under Section 43(1), any person convicted of driving carelessly and inconsiderately can be fined a minimum of RM4,000 or up to RM10,000 as well as jailed for up to 12 months.

Universiti Malaya Centre for Transportation Research head Dr Yuen Choon Wah, however, felt the existing penalties do not act as a deterrent.

Pointing to Section 41(1), he said the jail term and fine are disproportionate to the offence as it may result in fatalities.

“This is why the (Road Transport) Act should be reviewed to provide for heavier penalties,” he added.

Crime analyst Datuk Seri Akhbar Satar has previously been quoted as saying that the Road Transport Department should be stricter in the enforcement of its Demerit Points System for Traffic Offences (Kejara) as well as conduct spot checks more frequently to tackle the problem of truck drivers driving under the influence of drugs.

He also said that while Malaysia has adequate laws against drunk driving or driving under the influence of drugs, their enforcement is perceived to be weak. - Bernama