Highways and airports expecting increase in travel volume for Raya 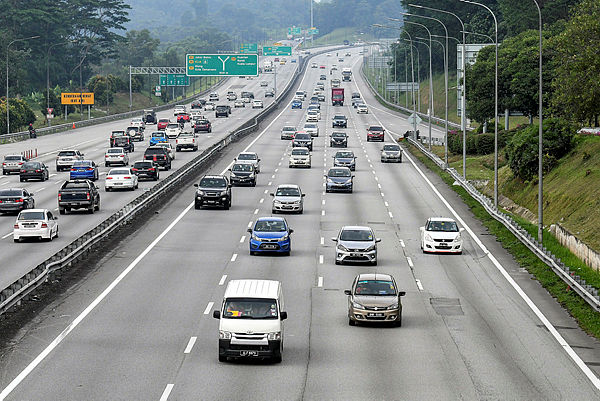 Traffic conditions along the PLUS expressway as people return home for the Hari Raya celebrations. — Bernama

A spokesperson from the Malaysian Highway Authority (LLM) said traffic was smooth on several highways including the PLUS highway, Elite Expressway, East coast expressway 1 and 2.

“There is a slight congestion at the Gombak Tol Plaza of the KL-Karak Highway but this was due to the rainy weather.”

“So far there are no major accidents, though there were about three non-major cases of bumper to bumper accidents,” she said.

Traffic is also reported to be smooth along the PLUS highway, The Elite Expressway, Secondlink Expressway (Linked Kedua), Butterworth–Kulim Expressway, Seremban–Port Dickson Highway and the Penang Bridge.

A Plus spokesperson told theSun that 10 minor accidents occurred on the highways however no congestion was reported due to the still low volume of traffic.

One of the reasons for the smooth traffic flow could be due to schools having closed for the holidays last week and parents having decided to ‘balik kampung’ early.

Malaysia Airports Holdings Berhad (MAHB) ensured that all airport stakeholders will ensure a safe and seamless travel experience for passengers travelling through its airports during the super peak travel period between today and June 10 for Hari Raya, which also coincides with Pesta Gawai and Keamatan.

In a statement, MAHB said that the Kuala Lumpur International Airport (KLIA) is expected to see a 3.0% increase in movements compared to last year.

“KL International Airport (IATA Code: KUL) is expected to see nearly 100,000 passengers daily at each terminal during this period.

“Local airlines operating at both terminals - KLIA Main and klia2, have added more than 500 additional flights to cater to the increase in domestic and international passengers.”

Delay in BWI distribution due to dubious applications - PM

2.Delay in BWI distribution due to dubious applications - PM