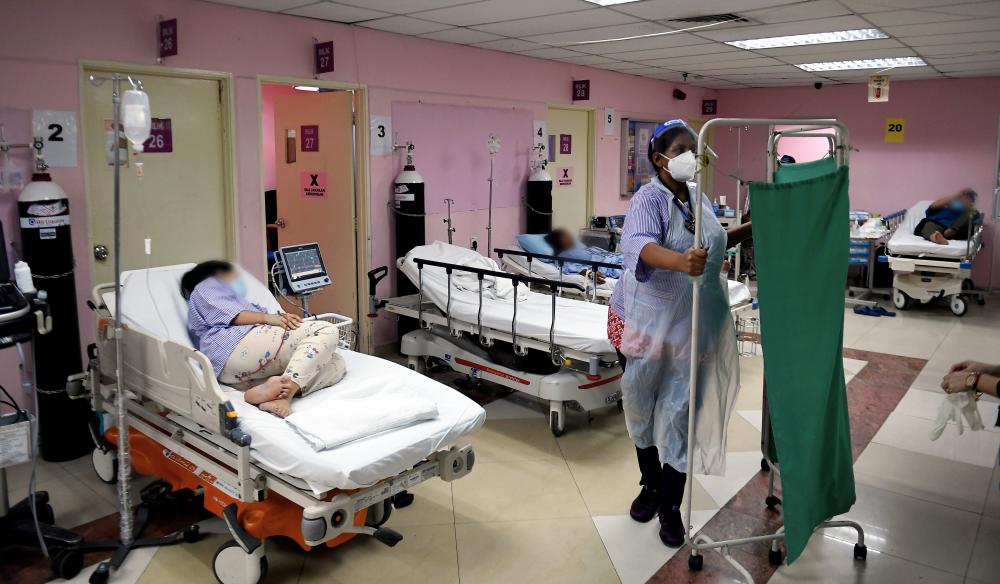 KUALA LUMPUR: Severe cases among unvaccinated younger people are outnumbering cases among vaccinated elderly people, which may be possibly linked to vaccine hesitancy, according to doctors in a Covid-19 hospital in Klang.

This comes as more than 55 percent of the population in Malaysia are fully vaccinated and almost 80 percent of Klang Valley residents have completed their vaccination.

Consultant emergency medicine specialist Dr Ahmad Tajuddin Mohamad Nor told Bernama about two-thirds of Covid-19 patients treated at Tengku Ampuan Rahimah Hospital (HTAR) in Klang are below 60 and almost all have not been vaccinated.

“Almost all (of those under 60 who were hospitalised) have not been vaccinated. There is still that group missing out on vaccinations,” he said.

Dr Ahmad Tajuddin, who is also the head of the Emergency and Trauma Department at HTAR, said they started noticing the trend at the start of the fourth wave in late June. He added at that time, they did not think vaccine hesitancy was a major reason for their patients’ vaccination status as vaccinations were not as widespread then.

However, now that the vaccines have been easily available via walk-ins for almost two months, he suspected vaccine-hesitancy is playing a bigger role.

“The middle-aged, the younger ones... some of them are partially vaccinated (with) one dose, or will be missing (the vaccinations) altogether,” he said.

Vaccine skeptics, or anti-vaxxers as they are called, now comprise the majority of hospitalisations and deaths in countries that started vaccinations early, such as the United States and Israel.

According to the Ministry of Health (MOH), the unvaccinated account for almost 80 percent of hospitalisations in Malaysia currently.

Dr Ahmad Tajuddin said the vaccination status of patients has had a significant impact on the outcome of patients at HTAR.

“We noticed that stark difference. If you’re vaccinated, it’s very unlikely you’re going to turn any worse,” he said.

“If you (are unvaccinated and) present yourself in less severe stages, you may deteriorate quite rapidly. So if you’re coming in Stage 4 – someone who is dependent on oxygen – and you’re not vaccinated that is a red flag for us.”

He added all Covid-19 cases they receive have at least one comorbidity.

HTAR director Dr Zulkarnain Mohd Rawi confirmed the trend, estimating 70 percent of admissions were unvaccinated. He said that about 80 percent of deaths occurred among the unvaccinated, though he did not specify the age group.

He also said many of the younger patients who took a turn for the worse also had undetected diabetes prior to hospitalisation.

“The younger ones ... they have comorbidities, obesity, diabetes and never underwent a medical check-up. When they’re admitted to the hospital, that is when we find out they have diabetes,” he said.

Dr Ahmad Tajuddin said he believed some people in the younger age group may decide against getting the vaccine thinking that they have enough protection against the new virus.

“I think the memory is it (COVID-19) started as a disease of the elderly or those with medical conditions. I think maybe that gave a sense of false security to the younger ones,” he said.

He said younger people were also more likely to go out more often and not adhere to the preventative guidelines.

According to MOH data, about six percent of residents in Malaysia or 1.46 million have not registered for vaccination. All registered adults have received at least one dose with none waiting for their first dose. Those who did not register for the vaccine include the diehard vaccine skeptics or people who were not able to overcome barriers to access, be it technical or geographical.

Aided by non-governmental groups including MERCY Malaysia, the Malaysian Red Crescent Society and IMARET, the MOH has been engaged in reaching those who may have problems accessing the vaccine, such as those in rural areas and migrant workers.

“Registration is not a precondition for vaccination. Walk-in vaccinations are open in most places around Malaysia. Furthermore, there are immense outreach efforts (involving every means at our disposal – helicopters, boats, you name it) to vaccinate the digitally gapped,” tweeted Dr Mahesh Appannan, head of data at the Crisis Preparedness and Response Centre (CPRC) in response to a question by Member of Parliament for Teluk Intan Nga Kor Ming.

Anti-vaxxers are believed to be a small percentage of the population. However, it has not stopped them from sharing misinformation and actively trying to discourage people from getting their shot on social media. Some are also selling fake digital vaccination certificates to the non-vaccinated to enable them to dine in at restaurants, go to the cinema and, in certain cases, travel interstate.

Public health experts and employer groups have voiced support for vaccine mandates in the future should enough residents refuse to get vaccinated despite outreach efforts. -Bernama