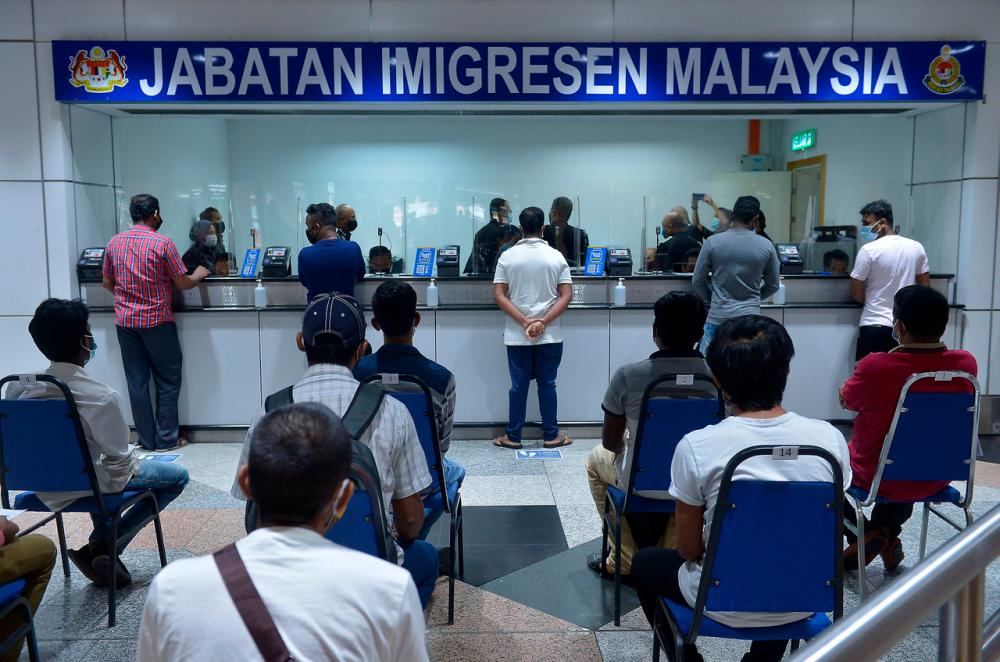 SEPANG: At Level 2 of Block B, Kuala Lumpur International Airport (KLIA), scores of foreigners with luggage of various colours are seen waiting for their flights to return to their countries of origin.

Some are seen taking a short nap, while others are making video calls and several others are still dealing at the Return Recalibration Programme for Illegal Immigrants special counters, run by the Immigration Department, to help facilitate their return to their countries of origin.

Two of them, N.Prabakaran, 23, and M.Vijay, 21, from Pudukottai and Sivaganga, in India, are among thousands of illegal immigrants who participated in the ongoing return recalibration programme at KLIA, to return to their countries of origin without having to go through the online appointment application (STO) in dealing with the Immigration office.

Prabakaran came to Malaysia in 2019 and worked as a hotel waiter and car washer in Rawang before his travel documents expired a year later.

“Since then, I have tried to do various jobs but have not been successful due to the effects of Covid-19. After finding out that there was a return recalibration programme through Tamil news, I and other friends continued to make the necessary preparations to return to India” he told Bernama recently.

To participate in this programme, immigrants are required to have, among others, valid travel documents which have been approved by their respective embassies, a flight ticket to the country of origin, paid a RM500 compound and must produce the polymerase chain reaction (RT-PCR) screening test slip, which should be valid 72 hours from the time of their flight.

Meanwhile, Vijay came to Malaysia in 2018 to work in a farm and car wash and his travel documents expired after two years.

Since the implementation of the Movement Control Order in March last year, he has neither a permanent job nor a stable income and has been unable to raise money to return to his country.

“My return trip to India is also courtesy of my former employer who helped me financially as I didn’t have enough money,” said Vijay, who also thanked the Malaysian government and the Immigration Department for the initiative. Both Prabakaran and Vijay safely returned to India on Aug 3.

According to Immigration director-general, Datuk Khairul Dzaimee Daud, a total of 8,856 illegal immigrants were repatriated to their respective countries under the programme at KLIA, from July 5 to 31.

Sympathetic to the plight of these foreigners who have to go through a long waiting period at KLIA, apart from food restrictions, non-governmental organisations (NGOs) Pravasi Malayalee Association Malaysia (PMA) and Sikh Association Malaysia, came forward to provide food and beverages to them.