Impossible for Kelantan govt to be unaware of mining area in Kuala Koh: Deputy minister 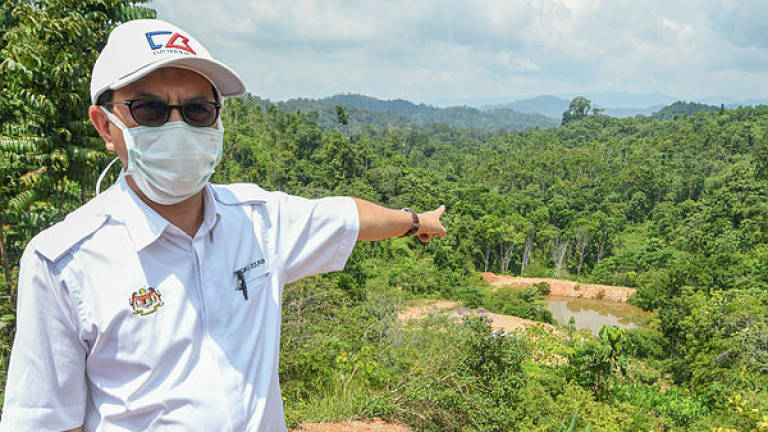 Deputy Minister of Water, Land and Natural Resources Tengku Zulpuri Shah Raja Puri points to the reservoir water from an iron ore mine near a Orang Asli settlement, while visiting the Batek Orang Asli community in Kampung Kuala Koh on June 9, 2019. — Bernama

KUALA LUMPUR: Deputy Minister of Water, Land and Natural Resources Tengku Zulpuri Shah Raja Puji today said that it was impossible for the Kelantan state government to be unaware that there was an iron ore mining area near the settlement of Orang Asli of the Batek tribe in Kuala Koh, Gua Musang.

He also described Deputy Mentri Besar Datuk Mohd Amar Nik Abdullah’s statement denying the existence of the mining area as utterly absurd because the ministry’s check had found that the miner had obtained the licence to run the mining operation until 2023.

“Upon check, we found that the mining company had obtained the mining licence until 2023 ... but the operating licence issued by the federal government had been terminated in 2017 as the company failed to comply with the Environmental Impact Assessment (EIA) Report.

“So, the statement (that there was no such mining area) is utterly absurd because I personally had gone to the area and saw that the mining machines and equipment were still there,” he told Bernama when contacted, here today.

Prior to this, Mohd Amar was reported to have said that there was no record of a legal mining activity in the area and that the matter was verified by the state Department of Environment (DOE).

The deputy mentri besar was also quoted as saying that the allegation that the Orang Asli of the Batek tribe were infected with pneumonia because their water source was polluted by the mining operation was not true because pneumonia is spread from person-to-person through airborne droplets.

The Kelantan Fire and Rescue Department had also verified that checks by its hazardous materials (Hazmat) team yesterday found that several areas in Kuala Koh were free of pollution or radioactive contaminants.

2.Gyms back in operation, except for those in phase one states: MKN