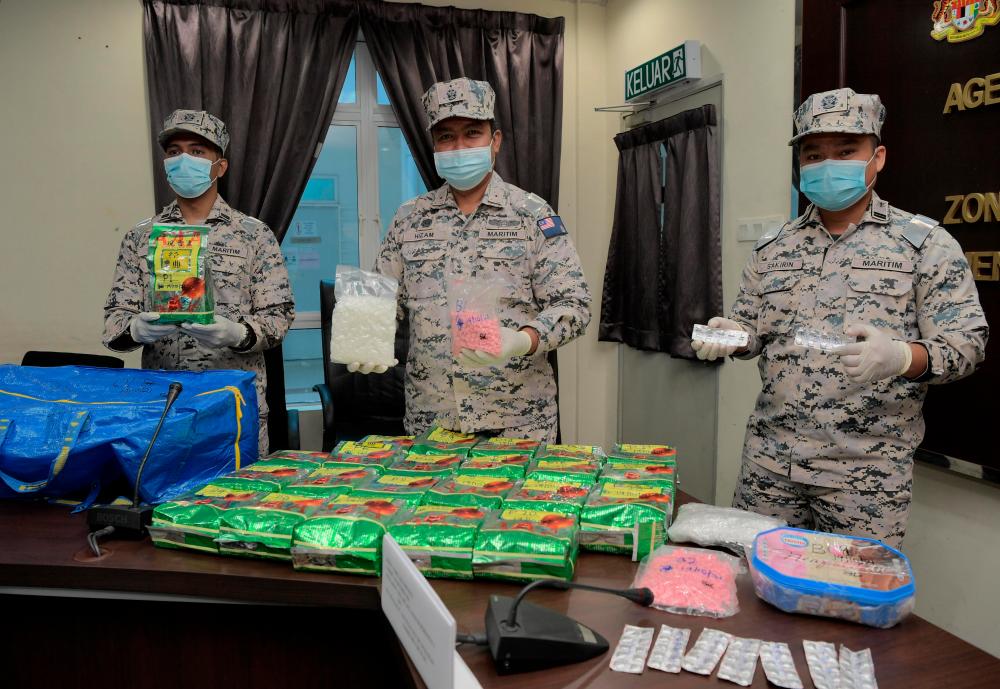 BATU PAHAT: The Malaysian Maritime Enforcement Agency (MMEA) has thwarted an attempt by a drug trafficking syndicate that used ‘togok’ (platform built for fishing) to smuggle drugs out to Indonesia in Muar waters, early yesterday morning.

He said the operation was conducted following information and continuous intelligence gathering on drug smuggling activities by the Batu Pahat Maritime Zone around the waters of west of Johor.

“During the patrol carried out by the Petir 85 boat yesterday, the team detected a suspicious looking object in the form of a black plastic package on the ‘togok’ platform.

“The purpose of placing drugs at the togok, which is located about three nautical miles southwest of Parit Jawa, Muar and 12 nautical miles from the national border, is to avoid detection,” he said in a press conference at the Batu Pahat Maritime Zone, today.

Nurul Hizam said that further inspection of the plastic package found that 23 green Chinese tea packages containing syabu, one white package containing two small packets of pink pills (ecstasy) and nine strips of eramin 5 pills. However, no arrests were made.

“The case is being investigated under Section 39B of the Dangerous Drugs Act 1952 and we believe that placing the drugs at the togok, before being taken by the next party for delivery to the destination, is one of the new tactics used by the syndicate,” he said.

This year, MMEA has managed to thwart seven attempts to smuggle drugs out to neighboring countries with a total seizure amounting RM7.9 million.

The total seizure involved 123.3 kg of syabu, 2,000 ecstasy pills and 90 eramin 5 pills at seven different locations, namely five in the waters of Muar and Batu Pahat and two more in the waters of Johor Bahru, he said.- Bernama