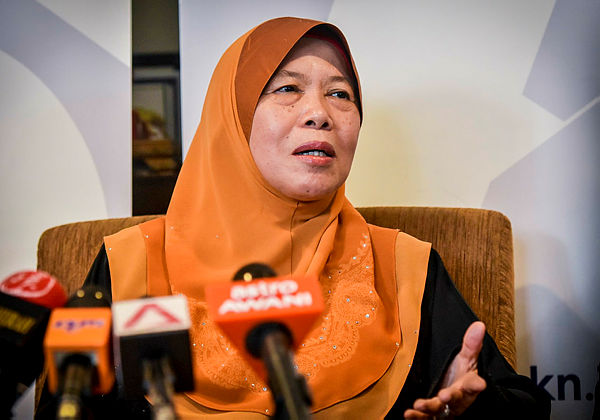 BEAUFORT: The decision to join Parti Pribumi Bersatu Malaysia (Bersatu) was not individually made but was a collective decision, said Beaufort MP, Datuk Azizah Mohd Dun.

According to her, it was also thought about deeply and went through various processes in the interest of the nation, Sabah and the constituencies they (the MPs) represented.

“We were unanimous in the decision and it wasn’t a question of an individual’s struggle, to save oneself or having a personal agenda,” she said when met by reporters after the Malaysia Higher School Certificate graduation ceremony of Sekolah Menengah Kebangsaan Kota Klias, here today.

She was asked to comment on the remarks made by Kinabatangan MP, Datuk Seri Bung Moktar Radin while debating in Parliament yesterday, that those individuals who had jumped party were weak, had no cause of struggle and no dignity.

Eight former Sabah Umno leaders, including six elected representatives have joined Bersatu after party chairman, Tun Dr Mahathir Mohamad handed over their Bersatu membership cards to them at the Perdana Leadership Foundation in Putrajaya on March 15.

Azizah said the phenomena of politicians crossing over to another party had been happening in the country’s politics for a long time, including in Sabah such as when Barisan Nasional (BN) wrested Sabah in 1994 after two assemblymen, Datuk Lajim Ukin (Klias) and Datuk Rubin Balang (Kemabong) from Parti Bersatu Sabah joined BN.

She said the struggle of developing the rural areas had to continue, especially in Sabah, and she agreed with Kiandee’s statement that Bung Mokhtar’s remarks were just political. — Bernama