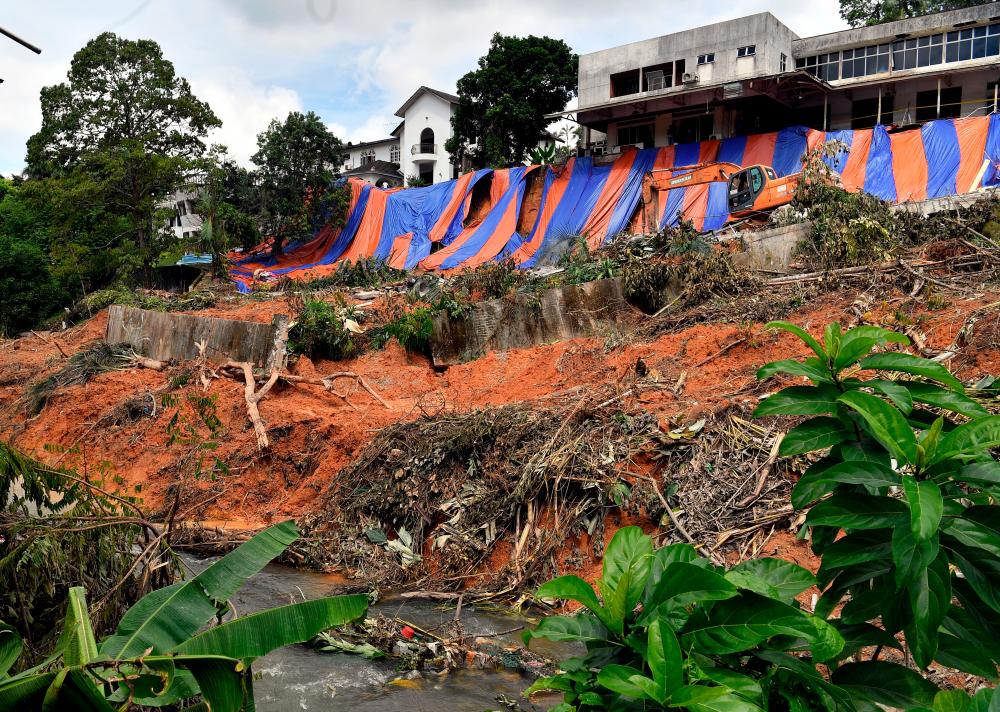 KUALA LUMPUR: Residents who were affected by the landslide along Jalan Kemensah Heights here on Friday are hoping that slope stabilisation works and upgrading of Sungai Kemensah can be implemented immediately to prevent similar incidents from recurring.

A resident, Razni Samsuddin, 64, said the relevant authorities should do a technical study of the area and implement slope stabilisation work quickly so that the affected residents can return to their homes.

“I leave it to the relevant bodies which handle the technical aspects to do what is necessary to prevent a recurrrence in the future,” he told Bernama yesterday.

Recalling the incident, Razni said it happend at about 8.30 pm when soil from the slope began entering the area of his home.

Another resident, Ajmal Zaim, 25, said he hoped the additional pilings and cement work could be done to prevent a repeat of what happened.

“This will prevent soil or earth from entering the river each time there is a downpour,” he said.

For Puziah Ahmad, 68, she was waiting for further instructions from the authorities on whether she should move out.

She said she would abide if asked to vacate her home but till now there have been no instructions from the authorities for her to move out.

“To date, there have been no reports of break-ins or theft of properties and affected residents are allowed to be in their homes until six in the evening every day to manage their homes,” said Farouk when contacted by Bernama.

Bernama also visited the scene of the landslide today and found that cleaning and slope stabilisation work was being carried out by the Selangor Drainage and Irrigation Department (DID).

Yesterday, Minister in the Prime Minister’s Department (Special Functions) Datuk Dr Abd Latiff Ahmad said that a RM1 million allocation had been approved for implementing reinforcement work and stabilisation of the Sungai Kemensah river banks and other related works.- Bernama

1.Dybala and Chiesa both to start as Juve hunt for more goals

2.Najib sues Tommy Thomas for alleged abuse of power in prosecuting him in 1MDB scandal

4.Family’s excitement at planned holiday turns to grief after girl, 11, dies in fall

5.Covid: Birthday celebration could have created new cluster in Ranau